Consider a regression problem. A model could underfit, right-fit, or overfit.

In this case, the model is powerful enough to fit both the original data and the noise, producing a poor solution for the task at hand.

Ideally we would like our model to fit the underlying data and not the noise, producing a good fit for our data. We would especially like to do this without needing to reduce the power of our models. Deep learning models are very powerful, often much more than is strictly necessary in order to learn the data. We would like to keep that power (to make training easier), but still fight overfitting.

Overfitting can be useful in some cases, such as during debugging. One can test a network on a small subset of training data (even a single batch or a set of random noise tensors) and make sure that the network is able to overfit to this data. If it fails to learn, it is a sign that there may be a bug.

Regularization adds prior knowledge to a model; a prior distribution is specified for the parameters. It acts as a restriction on the set of possible learnable functions.

Another definition of regularization from Ian Goodfellow:

Regularization is any modification we make to a learning algorithm that is intended to reduce its generalization error but not its training error.

We can select a prior for our network parameters by initializing the weights according to a particular distribution. One option: Xavier initialization.

Weight decay is our first regularisation technique. Weight decay is in widespread use in machine learning, but less so with neural networks. In PyTorch, weight decay is provided as a parameter to the optimizer (see for example the weight_decay parameter for SGD).

This is also called:

We can consider an objective which acts on the parameters:

then we have updates:

For weight decay we add a penalty term:

which produces an update

This new term in the update drives the parameters $\theta$ slightly toward zero, adding some “decay” in the weights with each update.

Available as an option for PyTorch optimizers.

Viewing this as a Laplace distribution prior, this regularization puts more probability mass near zero than does a Gaussian distribution.

Starting with the same update as above we can view this as adding another penalty:

which produces an update

Unlike $L_2$ weight decay, the $L_1$ regularization will “kill” components that are close to an axis in the parameter space, rather than evenly reducing the length of the parameter vector.

Dropout involves setting a certain number of neurons to zero randomly during training. This prevents the network from learning a singular path from input to output. Similarly, due to the large parametrisation of neural networks, it is possible for the neural network to effectively memorize the input. However, with dropout, this is a lot more difficult since the input is being put into a different network each time since dropout effectively trains a infinite number of networks that are different each time. Hence, dropout can be a powerful way of controlling overfitting and being more robust against small variations in the input. 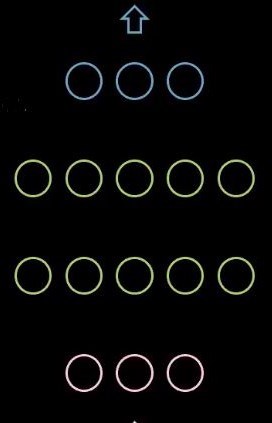 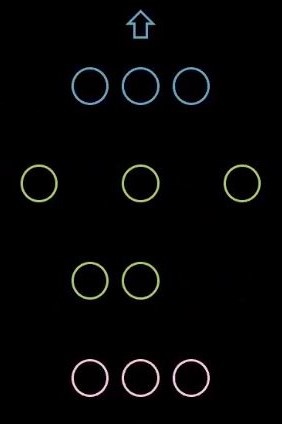 In PyTorch, we can set a random dropout rate of neuron.

After training, during inference, dropout is not used any more. In order to create the final network for inference, we average over all of the individual networks created during dropout and use that for inference. We can similarly multiply all of the weights by $1/1-p$ where $p$ is the dropout rate.

There are techniques that have the side-effect of regularizing parameters but are not regularisers themselves.

Q. How does batch norm make training more efficient? A. We can use higher learning rate when applying batch norm.

Batch normalization is used to prevent the internal covariate shift of a neural network but there is a lot debate if it actually does this and what the true benefit actually is.

Batch normalisation essentially extends the logic of normalizing the input of the neural network to normalizing the input of each hidden layer in the network. The basic idea is to have a fixed distribution feed each subsequent layer of a neural network since learning occurs best when we have a fixed distribution. To do this, we compute the mean and variance of each batch before each hidden layer and normalize the incoming values by these batch specific statistics, which reduces the amount by which the values will ultimately shift around during training.

Regarding the regularizing effect, due to each batch being different, each sample will be normalized by slightly different statistics based upon the batch it is in. Hence, the network will see various slightly altered versions of a single input which helps the network learn to be more robust against slight variations in the input and prevent overfitting.

Another benefit of batch normalisation is that training is a lot faster.

Gathering more data is a easy way to prevent overfitting but can be expensive or not feasible.

Transformations using Torchvision can have a regularizing effect by teaching the network to learn how to be insensitive to perturbations.

Transfer learning (TF) refers to just training a final classifier on top of a pre-trained network (used in cases of little data generally).

Fine tuning (FT) refers to training partial/full portions of the pre-trained network as well (used in cases where we have a lot of data generally).

Q. Generally, when should we freeze the layers of a pre-trained model? A. If we have little training data.

Note, we can also use different learning rates for different layers in order to improve performance.

To further our discussion about overfitting and regularisation, let us look at the visualisations below. These visualisations were generated with the code from Notebook.

Figure 9: Effect of regularization on weights

In Figure 9, we observe the effect that regularisation (L1 & L2) have on the weights of the network.

We care about uncertainty in neural networks because a network needs to know how certain/confident on its prediction.

Ex: If you build a neural networks to predict steering control, you need to know how confident the network’s predictions.

Usually during inference, we set the network to validation mode and use all neurons to get the final prediction. While doing the prediction, we scale the weights $\delta$ by $\dfrac{1}{1-r}$ to account for dropping neurons during training. 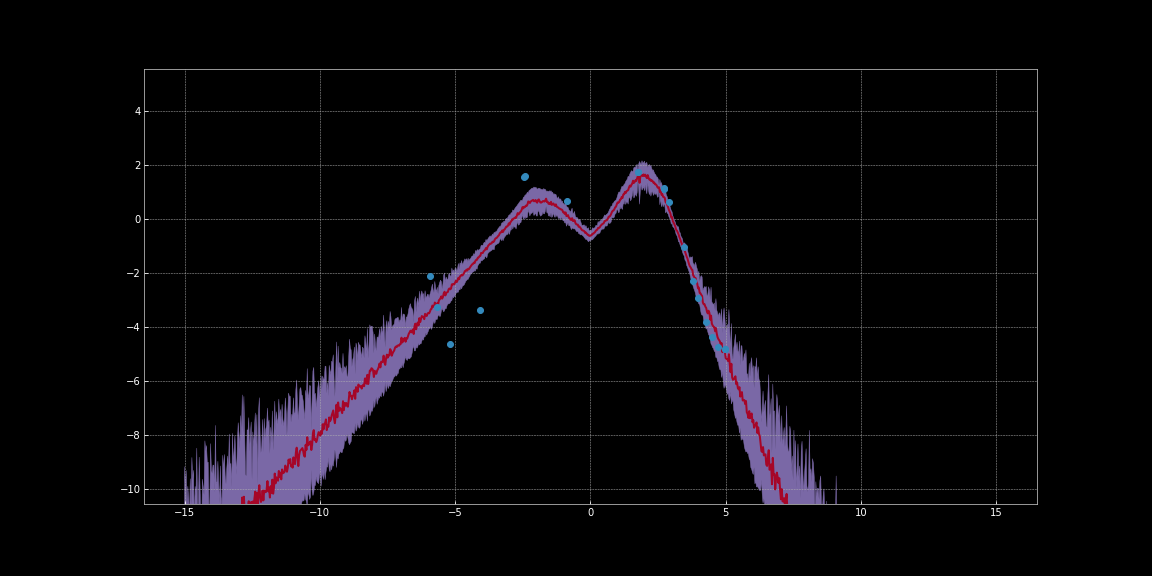 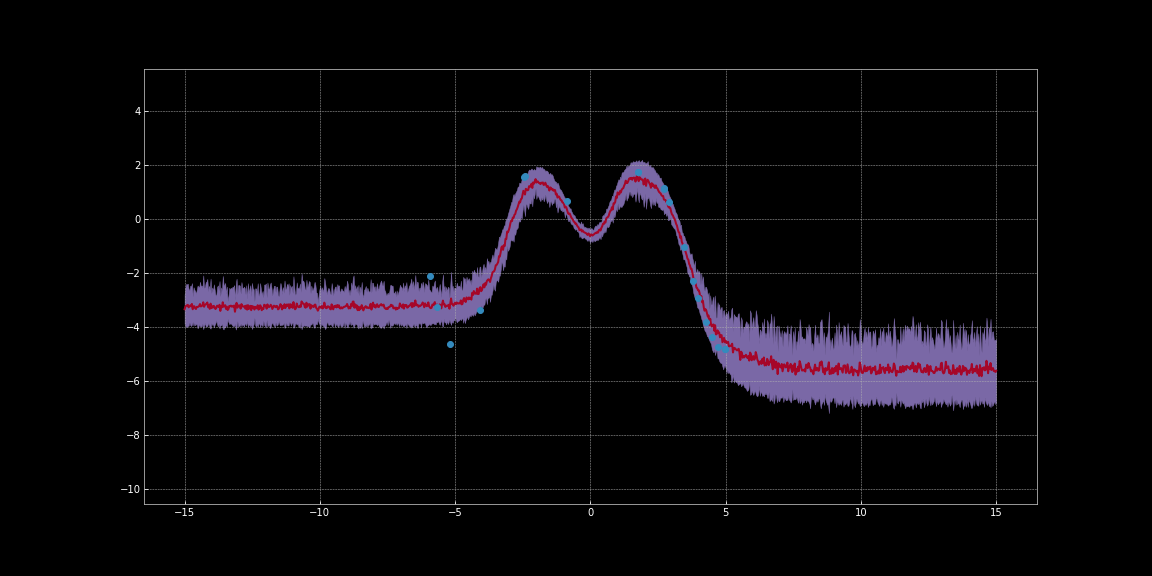 As you can observe in the above images, these uncertainty estimations are not calibrated. They are different for different activation functions. Noticeably in the images, uncertainty around data points is low. Furthermore, the variance that we can observe is a differentiable function. So we can run gradient descent to minimise this variance. Thereby we can get more confident predictions.

If we have multiple terms contributing to total loss in our EBM model, how do they interact?

In EBM models, we can simply and conveniently sum the different terms to estimate the total loss.

Digression: A term that penalises the length of the latent variable can act as one of many loss terms in a model. The length of a vector is roughly proportional to the number of dimensions it has. So if you decrease the number of dimensions, then the length of the vector decreases and as a result it encodes less information. In an auto-encoder setting, this makes sure that the model is retaining the most important information. So, one way to bottleneck information in latent spaces is to reduce the dimensionality of the latent space.

How can we determine the hyper-parameter for regularisation?

While doing these searches, the first few epochs are usually enough to give us a sense of how the regularization is working. So we need train the model extensively.