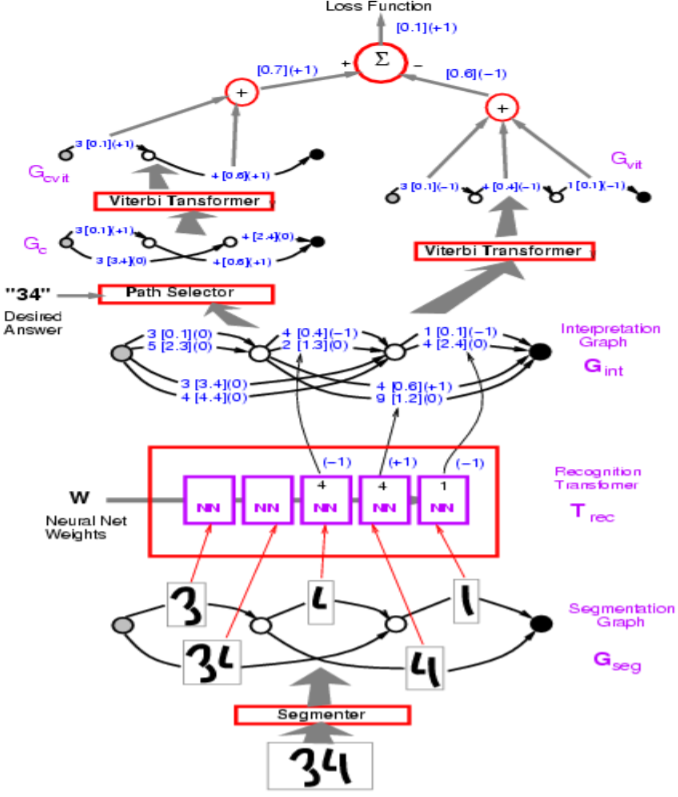 In the figure above, incorrect paths have $-1$.

Professor LeCun starts with perceptron loss, which is used in the example of Graph Transformer Model in the figure above. The goal is to make energy of wrong answers large, and correct ones small.

In terms of implementation, you would represent the arcs in the visualization with a vector. Rather than a separate arc for each category, one vector contains both the categories and the score for each category.

Q: How is the segmentor implemented in the model above?

A: The segment is handcrafted heuristics. The model uses a handcrafted segment although there is a way to make it trainable end-to-end. This handcrafted approach was superseded by the sliding window approach for character recognition.

The perceptron loss seen in the table above does not have a margin, and thus the loss has a risk of collapsing.

Q: How may hinge be better than NLL loss?

A: Hinge is better than NLL because NLL will try to push the difference between the correct answer and other answers to infinity, whereas hinge only wants to make it larger than some value (the margin m).

A decoder inputs a sequence of vectors that indicate the scores or energy of individual sounds or images, and picks out the best possible output.

Q: What are some examples of problems that can use decoders? A: Language modelling, machine translation, and sequence tagging.

Graph composition allows us to combine two graphs. In this example we can see a language model lexicon being represented as a $trie$ (a graph) and a recognition graph which is produced by a neural network. 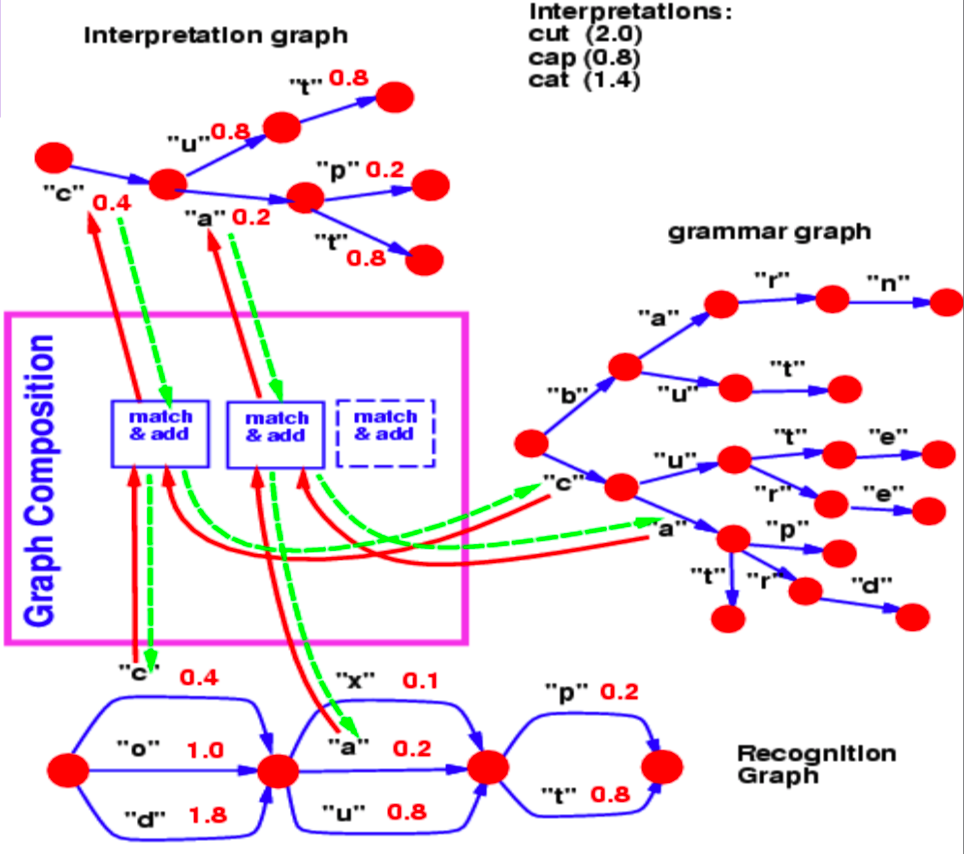 The recognition graph specifies with different energy values (associated with each arc) how likely a character is at a particular step.

Now, for this example, the question we answer with a graph composition operation is, what is the best path in this recognition graph that also agrees with our lexicon?

If the grammar also contained energy values associated with arcs, the graph composition would have added the energy values or combined them using some other operator.

A check reader from mid-90s

The entire architecture of a check reader from the mid-90s is quite complex, but what we are primarily interested in, is the part starting from the character recogniser, which produces the recognition graph.

This recognition graph undergoes two separate composition operations, one with the correct interpretation (or the ground truth) and second with the grammar which creates a graph of all possible interpretations.

The entire system is trained via the Negative Log-Likelihood loss function. The negative log-likelihood says that each path in the interpretation graph is a possible interpretation and sum of energies along that path is the energy of that interpretation.

Now, instead of using the Viterbi algorithm, we use the forward algorithm. The following sub-sections discuss the differences between the two approaches.

Viterbi algorithm is a dynamic programming algorithm that is used to find the most likely path (or the path with the minimum energy) in a given graph. It minimises the energy with respect to a latent variable z, where z represents the path we are taking in the graph.

The forward algorithm, on the other hand, computes the log of sum of exponentials of the negative value of energies of all paths. This mouthful can be easily seen as a formula below:

The working of the forward algorithm can be shown using the following example defined on an interpretation graph. 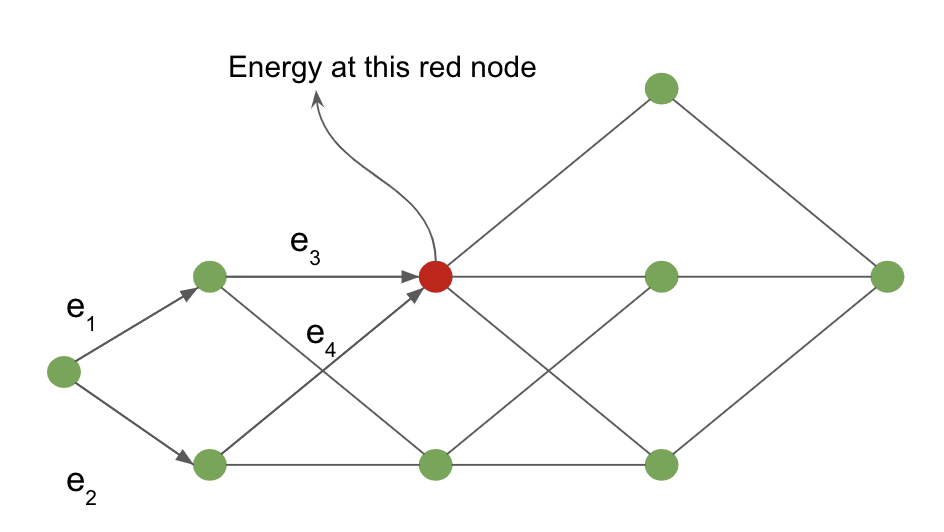 For the red node, the value of energy at the node is given by:

The forward algorithm is a special case of the belief-propagation algorithm, when the underlying graph is a chain graph. This entire algorithm can be viewed as a feed-forward neural network where the function at each node is a log sum of exponentials and an addition term.

For each node in the interpretation graph, we maintain a variable $\alpha$.

$\alpha_i$ forms the activation of a node $i$ in this neural network and $e_{ki}$ is the weight between nodes $k$ and node $i$. This formulation is algebraically equivalent to the weighted sum operations of a regular neural network in the log domain.

We can backpropagate through the dynamic interpretation graph (since it changes from example to example) on which we apply the forward algorithm. We can compute the gradients of $F(x, y)$ computed at the last node of the graph w.r.t the $e_{ki}$ weights defining the edges of the interpretation graph.

Returning back to the check reader example, we apply the forward algorithm on the two graph compositions and obtain the energy value at the last node using the log sum exponential formula. The difference between these energy values is the negative log-likelihood loss.

The value obtained from applying the forward algorithm on the graph composition between correct answer and recognition graph is the log sum exponential value of the correct answer. In contrast, log sum exponential value at the last node of the graph composition between recognition graph and grammar is the marginalised value over all possible valid interpretations.

To minimize $\mathcal{L}$, we need to set the partial derivatives of $\mathcal{L}$ with respect to each of its arguments to zero and solve.

This approach originated with Lagrange and Hamilton in the context of Classical Mechanics, where the minimization is over the energy of the system and the $\lambda$ terms denote physical constraints of the system, such as two balls being forced to stay at a fixed distance from each other by virtue of being attached by a metal bar, for example.

Using this formulation of backprop, we can now talk about a new class of models, Neural ODEs. These are basically recurrent networks where the state, $z$, at time $t$ is given by $ z_{t+\text{d}t} = z_t + f(z_t, W) dt $, where $ W$ represents some set of fixed parameters. This can also be expressed as an ordinary differential equation (no partial derivatives): $\frac{\text{d}z}{\text{d}t} = f(z_t, W)$.

Training such a network using the Lagrangian formulation is very straightforward. If we have a target, $y$, and want the state of the system to reach $y$ by time $T$, we simply establish the cost function as the distance between $z_T$ and $y$. Another goal of the network could be to find a stable state of the system, i.e. one that ceases to change after a certain point. Mathematically, this is equivalent to setting $\frac{\text{d}z}{\text{d}t} = f(y, W) = 0$. In general, finding a solution, $y$ to this equation is much easier than back propagation through time, because the network need not remember the gradient with respect to the whole sequence, and only has to minimize $f$ or $\lvert f \rvert^2$. For more information about training neural ODE’s to reach fixed points, see (Lecun88).

For an elementary energy function $E(x,y,z)$, if we wish to marginalize over a variable, z, to obtain a loss in terms of only $x$ and $y$, $L(x,y)$, we must compute

If we assume that $q(z)$ is a probability distribution over $z$, we can interpret our rewritten loss function integral as an expected value, with respect to the distribution of $\frac{\exp({-\beta E(x,y,z)})}{q(z)}$.

We use this interpretation, Jensen’s Inequality, and sampling-based approximations, to indirectly optimize our loss function.

Jensen’s Inequality is a geometrical observation that states: if we have a convex function, then the expectation of that function, over a range, is less than the average of the function evaluated at the beginning and end of the range. Geometrically illustrated this is very intuitive: 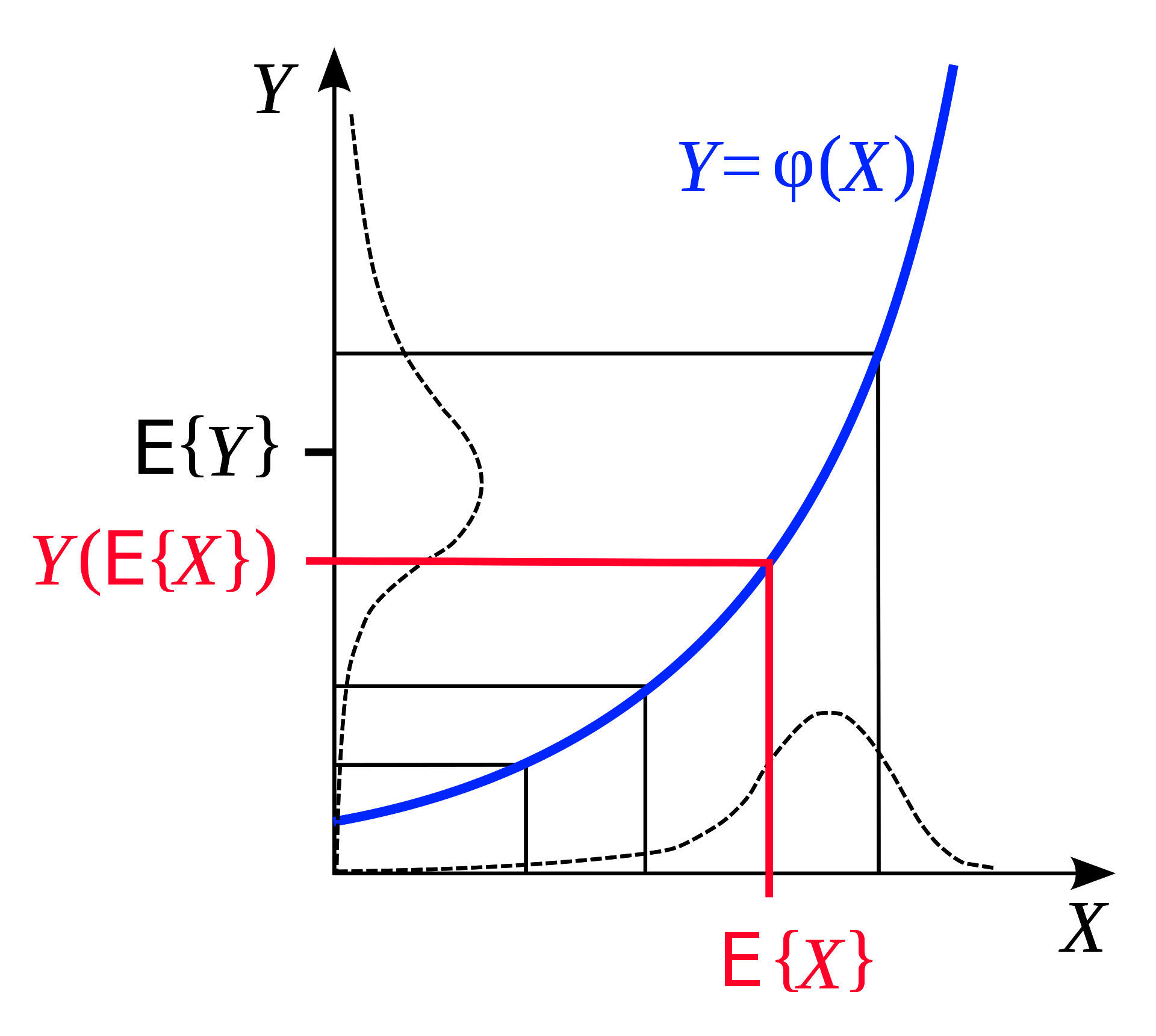 Likewise, if $F$ is convex, for a fixed probability distribution $q$, we can infer from Jensen’s Inequality that over the range $z$,

Let’s continue to work this, with a concrete convex loss function, $F(x) = -\log(x)$

We now have formulated an upper bound in such a way that we can avoid complicated integrations, and instead simply approximate these values by sampling from a surrogate distribution ($q(z)$), of our choice!

To get the value of the first term of our upper bound function, we just sample from that distribution, and compute the average value of $L$ that we obtain from applying our sampled $z$’s.

The second term (a factor of entropy) is just a property of the distribution family, and can likewise be approximated with random sampling of $q$.

Finally, we can minimize $L$ with respect to its parameters (say, weights of a network $W$), by minimizing this function that bounds $L$ above. We conduct this minimization by updating our two variables: (1) the entropy of $q$, and (2) our model parameters $W$.

This is the “energy view” of variational inference. If you need to compute the log of a sum of exponentials, replace it with the average of your function plus an entropy term. This gives us an upper bound. We then minimise this upper bound, and in doing so minimize the function we actually care about.