What is the Curse of Dimensionality?

Consider an image of 1024 x 1024 pixels. This image can be seen as a point in the space for 1,000,000 dimensions. Using 10 samples per dimension generates ${10}^{1,000,000}$ images, which is extremely high. ConvNets are extremely powerful to extract best representation of high-dimensional image data, such as the one given in the example.

It is formed of patterns that are:

They extract compositional features and feed them to classifier, recommender, etc.

The connection between the structure and function of the brain to predict neural genetic diseases offers a motivational example to consider. As can be seen below, the brain is composed of several Region of Interest(s) (ROI). These ROIs is only locally connected to some surrounding regions of interests. Adjacency matrix represents the degree of strengths between different regions of interest.

Quantum Chemistry also offers an interesting representation of graphical domain. Each atom is represented by a node in graph and is connected to other atoms through bonds using edges. Each of these molecules/atoms have different features, such as the associated charge, bond type etc. 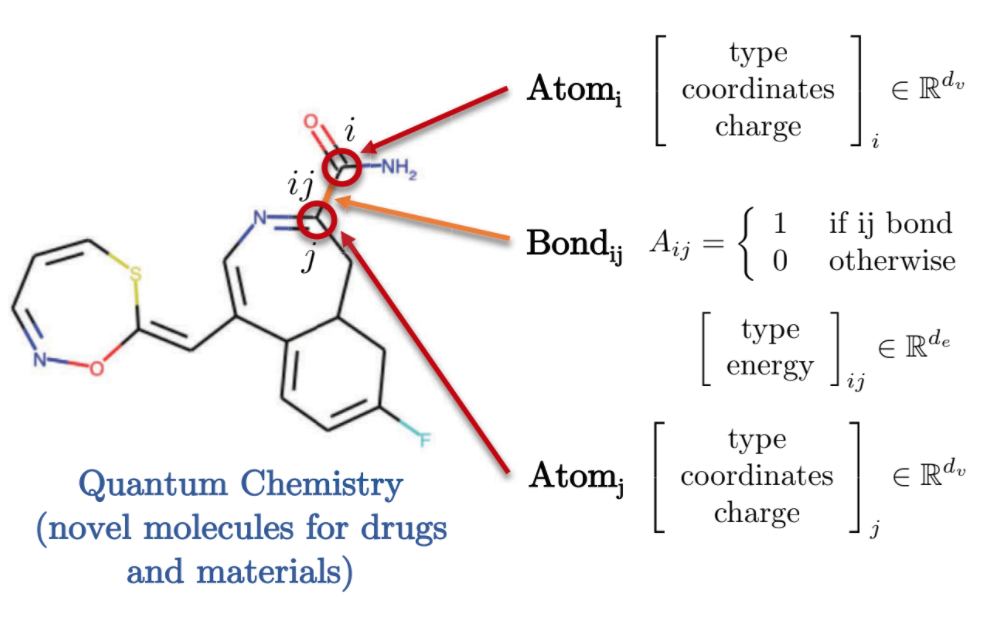 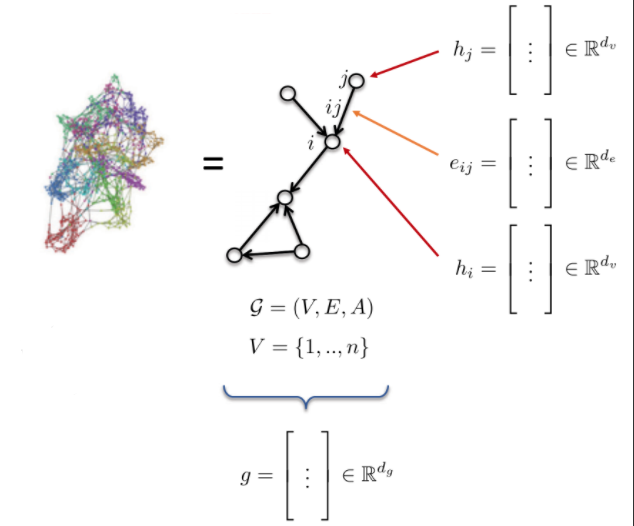 We abstractly define convolution as:

For example, in this image, the kernel may be used to recognize lines.

Fig. 11: Kernel can be used to recognize lines in images.

How do we define convolution?

However, it does not really matter if you use the first or second, because your kernel is just flipped, and this does not impact learning.

The kernel is very small, so instead of summing over the whole image $\Omega$, as in the second line, we actually just sum over the neighborhood of cell $i$, $\mathcal{N}_i$, as denoted in the third line.

This makes it so that the complexity of convolution is $O(n)$, where $n$ is the number of pixels in the input image.

Convolution is exactly for each of the $n$ pixels, summing over inner products of vectors of dimension $d$ over $3\times 3$ grids.

The complexity is thus $n\cdot 3\cdot 3\cdot d$, which is $O(n)$; and moreover the computational can be done in parallel with GPUs at each of the $n$ pixels. 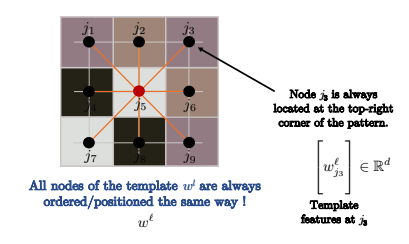 If the graph you are convolving over is a grid, as in standard convolution over images in computer vision, then the nodes are ordered as in the above image. Therefore, $j_3$ will always be in the top right corner of the pattern.

are always for the top right corner between the template and the image patches. 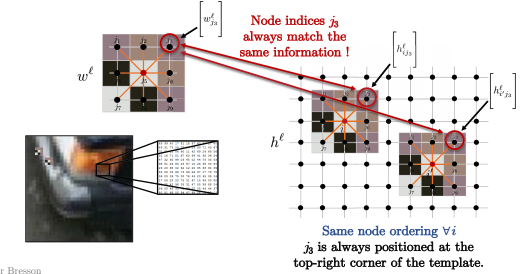 Can we extend template matching for graphs?

We have a couple of issues:

So in the template shown below in the image, node $j_3$ has no specific position, but just an (arbitrary) index. So, when we try to match against nodes $i$ and $i’$ in the graph below, we do not know if $j_3$ is matching against the same nodes in both convolutions.
This is because there is no notion of the top right corner of the graph.
There is no notion of up, down, left right.
Thus, the template matchings actually have no meaning and we cannot use the definition of template matching directly, as above. 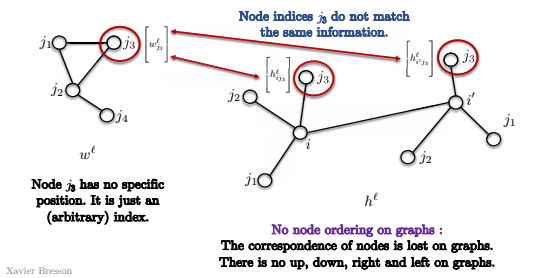 So the template $w^\ell$ shown below has 4 nodes, but node $i$ has 7 nodes in its neighborhood. How can we compare these two?

We now use the Convolution Theorem to define convolution for graphs.

In general, the Fourier transform has $O(n^2)$ complexity, but if the domain is a grid, then the complexity can be reduced to $O(n\log n)$ with FFT.

Can we extend the Convolution theorem to graphs?

We are going to use these two design for graph neural networks: Template matching will be for spacial graph ConvNets and the Convolution theorem will be used for the spectral ConvNets.

How to perform spectral convolution?

This is the core operator in spectral graph theory.

The Laplacian is interpreted as the measurement of smoothness of graph, in other words, the difference between the local value $h_i$ and its neighborhood average value of $h_j$’s. $d_i$ on the formula below is the degree of node $i$, and $\mathcal{N}_{i}$ is the all the neighbors of node $i$.

The formula above is to apply Laplacian to a function $h$ on the node $i$, which is the value of $h_i$ minus the mean value over its neighboring nodes $h_j$’s. Basically, if the signal is very smooth, the Laplacian value is small, and vice versa.

The following is the eigen-decomposition of graph Laplacian,

$\Phi$ is defined below, it contains column vectors, or Lap eigenvectors $\phi_1$ to $\phi_n$, each of size $n \times 1$, and those are also called Fourier functions. And Fourier functions form an orthonormal basis.

$\Lambda$ is a diagonal matrix with Laplacian eigenvalues, and on the diagonal are $\lambda_1$ to $\lambda_n$. And from the normalized applications, these values are typically among the range from $0$ to $2$. Those are also known as the Spectrum of a graph. See the formula below.

Below is an example of checking the eigenvalue decomposition. The Laplacian matrix $\Lambda$ is multiplied by an eigenvector $\phi_k$, the shape of the result is $n \times 1$, and the result is $\lambda_k \phi_k$.

The image below is the visualization of eigenvectors of 1D Euclidean Laplacian.

For graph domain, from the left to right, is the first, second, third, .. Fourier functions of a graph. For example, $\phi_1$ has oscillations of positive (red) and negative (blue) values, same for $\phi2$, $\phi3$. Those oscillations depend on the topology of a graph, which related to the geometry of graphs such as communities, hubs, etc, and it’s helpful for graph clustering. See below.

The Fourier transform is basically projecting a function $h$ on the Fourier functions, and the result are the coefficients of the Fourier series.

Fourier transforms are linear operations, multiplying a matrix $\Phi^{T}$ with a vector $h$.

The convolution of two functions on the graph $h$ and $w$ is to take the spectrum function of $w$ and apply it to Laplacian and multiply it by $h$, and this is the definition of spectrum convolution. However, the computation complexity is $\mathrm{O}\left(n^{2}\right)$, while $n$ is the number of nodes in the graph.

The spectral convolution against the graph domain is not shifting invariance, which means that if shifted, the shape of the function might also be changed, while in grid/euclidean domain does not.