Beam search is another technique for decoding a language model and producing text. At every step, the algorithm keeps track of the $k$ most probable (best) partial translations (hypotheses). The score of each hypothesis is equal to its log probability. 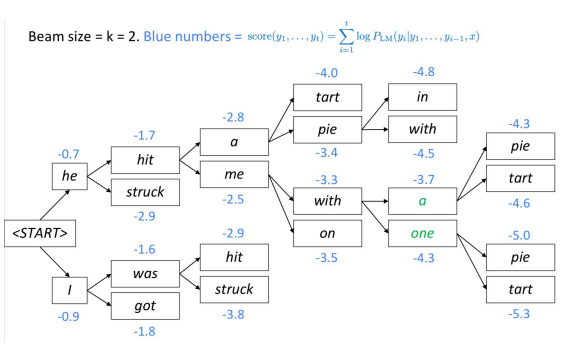 How deep does the beam tree branch out ?

Why (in NMT) do very large beam sizes often results in empty translations?

At training time, the algorithm often does not use a beam, because it is very expensive. Instead it uses auto-regressive factorization (given previous correct outputs, predict the $n+1$ first words). The model is not exposed to its own mistakes during training, so it is possible for “nonsense” to show up in the beam.

Summary: Continue beam search until all $k$ hypotheses produce end token or until the maximum decoding limit T is reached.

We may not want the most likely sequence. Instead we can sample from the model distribution.

However, sampling from the model distribution poses its own problem. Once a “bad” choice is sampled, the model is in a state it never faced during training, increasing the likelihood of continued “bad” evaluation. The algorithm can therefore get stuck in horrible feedback loops.

Question: Why does Top-K sampling work so well?

This technique works well because it essentially tries to prevent falling off of the manifold of good language when we sample something bad by only using the head of the distribution and chopping off the tail.

Evaluating the language model requires simply log likelihood of the held-out data. However, it is difficult to evaluate text. Commonly word overlap metrics with a reference (BLEU, ROUGE etc.) are used, but they have their own issues.

Generally, the input text is encoded. This resulting embedding is known as a “thought vector”, which is then passed to the decoder to generate tokens word by word.

The sequence-to-sequence variation of transformers has 2 stacks:

When training these models, we typically rely on large amounts of labelled text. A good source of data is from European Parliament proceedings - the text is manually translated into different languages which we then can use as inputs and outputs of the model.

Assume we want to train a model to translate German into English. The idea of back-translation is to first train a reverse model of English to German

Finally, train the German to English model using the German words that have been ‘back-translated’ in the previous step. We note that: 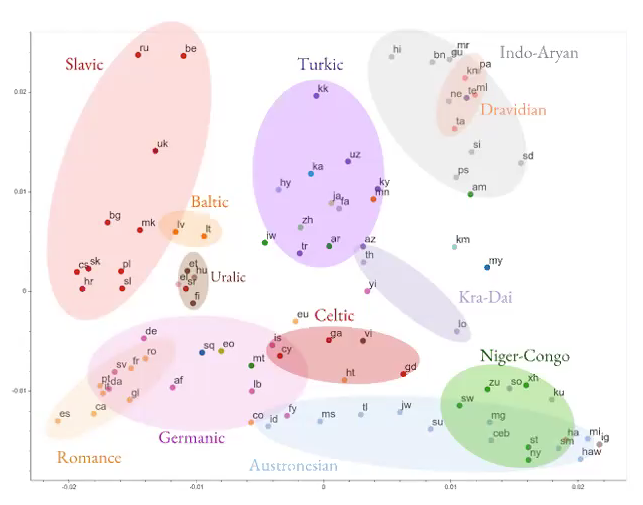 Great results especially if we want to train a model to translate to a language that does not have a lot of available data for us (low resource language).

There are huge amounts of text without any labels and little of supervised data. How much can we learn about the language by just reading unlabelled text?

Intuition - if words appear close together in the text, they are likely to be related, so we hope that by just looking at unlabelled English text, we can learn what they mean.

Pretraining task - mask some word and use neighbouring words to fill in the blanks.

For instance, here, the idea is that “horned” and “silver-haired” are more likely to appear in the context of “unicorn” than some other animal.

Take the words and apply a linear projection 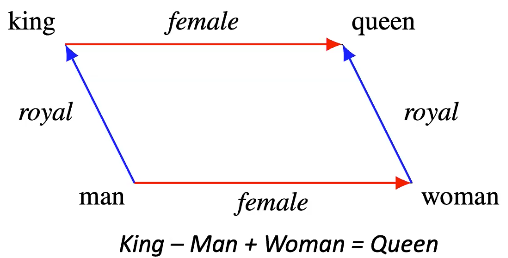 Question: Are the word representation dependent or independent of context?

Independent and have no idea how they relate to other words

Question: What would be an example of a situation that this model would struggle in?

Interpretation of words depends strongly on context. So in the instance of ambiguous words - words that may have multiple meanings - the model will struggle since the embeddings vectors won’t capture the context needed to correctly understand the word.

To add context, we can train a conditional language model. Then given this language model, which predicts a word at every time step, replace each output of model with some other feature.

This approach is good because we can reuse the model. We pretrain one large model and can fine tune to other tasks.

GPT only considers leftward context, which means the model can’t depend on any future words - this limits what the model can do quite a lot.

Here the approach is to train two language models

This is still a “shallow” combination, and we want some more complex interaction between the left and right context.

BERT is similar to word2vec in the sense that we also have a fill-in-a-blank task. However, in word2vec we had linear projections, while in BERT there is a large transformer that is able to look at more context. To train, we mask 15% of the tokens and try to predict the blank.

Can scale up BERT (RoBERTa):

Even larger improvements on top of BERT performance - on question answering task performance is superhuman now.

Let us take a quick look at different self-supervised pre training approaches that have been researched for NLP.

The key takeaways from the different models mentioned above are

Most of the models discussed above are engineered towards solving the text classification problem. However, in order to solve text generation problem, where we generate output sequentially much like the seq2seq model, we need a slightly different approach to pre training.

This seq2seq pretraining approach give us flexibility in designing our corruption schemes. We can shuffle the sentences, remove phrases, introduce new phrases, etc.

BART was able to match RoBERTa on SQUAD and GLUE tasks. However, it was the new SOTA on summarization, dialogue and abstractive QA datasets. These results reinforce our motivation for BART, being better at text generation tasks than BERT/RoBERTa.

Some open questions in NLP

Additional Insights from questions after class:

“The trophy did not fit into the suitcase because it was too big”: Resolving the reference of ‘it’ in this sentence is tricky for machines. Humans are good at this task. There is a dataset consisting of such difficult examples and humans achieved 95% performance on that dataset. Computer programs were able to achieve only around 60% before the revolution brought about by Transformers. The modern Transformer models are able to achieve more than 90% on that dataset. This suggests that these models are not just memorizing / exploiting the data but learning concepts and objects through the statistical patterns in the data.

Moreover, BERT and RoBERTa achieve superhuman performance on SQUAD and Glue. The textual summaries generated by BART look very real to humans (high BLEU scores). These facts are evidence that the models do understand language in some way.

Interestingly, the lecturer (Mike Lewis, Research Scientist, FAIR) is working on a concept called ‘Grounded Language’. The aim of that field of research is to build conversational agents that are able to chit-chat or negotiate. Chit-chatting and negotiating are abstract tasks with unclear objectives as compared to text classification or text summarization.

Can we evaluate whether the model already has world knowledge?

‘World Knowledge’ is an abstract concept. We can test models, at the very basic level, for their world knowledge by asking them simple questions about the concepts we are interested in. Models like BERT, RoBERTa and T5 have billions of parameters. Considering these models are trained on a huge corpus of informational text like Wikipedia, they would have memorized facts using their parameters and would be able to answer our questions. Additionally, we can also think of conducting the same knowledge test before and after fine-tuning a model on some task. This would give us a sense of how much information the model has ‘forgotten’.