This loss is a special case of cross entropy for when you have only two classes so it can be reduced to a simpler function. This is used for measuring the error of a reconstruction in, for example, an auto-encoder. This formula assume $x$ and $y$ are probabilities, so they are strictly between 0 and 1.

This is simple loss function for when your target is a one-hot distribution (i.e. $y$ is a category). Again it assumes $x$ and $y$ are probabilities. It has the disadvantage that it is not merged with a softmax or log-softmax so it may have numerical stability issues.

This version of binary cross entropy loss takes scores that haven’t gone through softmax so it does not assume x is between 0 and 1. It is then passed through a sigmoid to ensure it is in that range. The loss function is more likely to be numerically stable when combined like this.

Margin losses are an important category of losses. If you have two inputs, this loss function says you want one input to be larger than the other one by at least a margin. In this case $y$ is a binary variable $\in { -1, 1}$. Imagine the two inputs are scores of two categories. You want the score for the correct category larger than the score for the incorrect categories by at least some margin. Like hinge loss, if $y*(x_1-x_2)$ is larger than margin, the cost is 0. If it is smaller, the cost increases linearly. If you were to use this for classification, you would have $x_1$ be the score of the correct answer and $x_2$ be the score of the highest scoring incorrect answer in the mini-batch. If used in energy based models (discussed later), this loss function pushes down on the correct answer $x_1$ and up on the incorrect answer $x_2$.

This was originally used to train an image search system for Google. At that time, you would type a query into Google and it would encode that query into a vector. It would then compare that vector to a bunch of vectors from images that were previously indexed. Google would then retrieve the images that were the closest to your vector.

Creates a criterion that optimizes a two-class classification logistic loss between input tensor $x$ and target tensor $y$ (containing 1 or -1).

This margin-base loss allows for different inputs to have variable amounts of targets. In this case you have several categories for which you want high scores and it sums the hinge loss over all categories. For EBMs, this loss function pushes down on desired categories and pushes up on non-desired categories.

Hinge embedding loss used for semi-supervised learning by measuring whether two inputs are similar or dissimilar. It pulls together things that are similar and pushes away things are dissimilar. The $y$ variable indicates whether the pair of scores need to go in a certain direction. Using a hinge loss, the score is positive if $y$ is 1 and some margin $\Delta$ if $y$ is -1.

This loss is used for measuring whether two inputs are similar or dissimilar, using the cosine distance, and is typically used for learning nonlinear embeddings or semi-supervised learning.

Calculates loss between a continuous (unsegmented) time series and a target sequence.

Form of the loss functional:

Push down on the energy of the correct answer.

Push up on the energies of the incorrect answers, particularly if they are smaller than the correct one.

This loss function pushes down on the energy of the correct answer while pushing up on the energies of all answers in proportion to their probabilities. This reduces to the perceptron loss when $\beta \rightarrow \infty$. It has been used for a long time in many communities for discriminative training with structured outputs.

A probabilistic model is an EBM in which:

In the discrete case, the most offending incorrect answer is the one with smallest energy that isn’t the correct answer. In the continuous case, the energy for $Y$ extremely close to $Y^i$ should be close to $E(W,Y^i,X^i)$. Furthermore, the $\text{argmin}$ evaluated over $Y$ not equal to $Y^i$ would be 0. As a result, we pick a distance $\epsilon$ and decide that only $Y$’s at least $\epsilon$ from $Y_i$ should be considered the “incorrect answer”. This is why the optimization is only over $Y$’s of distance at least $\epsilon$ from $Y^i$. 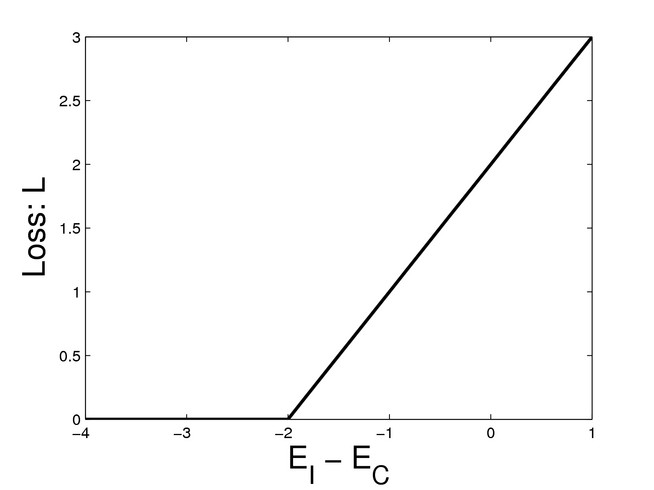 A: It’s arbitrary, but it affects the weights of the last layer.

This can be thought of as a “soft” hinge loss. Instead of composing the difference of the correct answer and the most offending incorrect answer with a hinge, it’s now composed with a soft hinge. This loss tries to enforce an “infinite margin”, but because of the exponential decay of the slope it doesn’t happen. 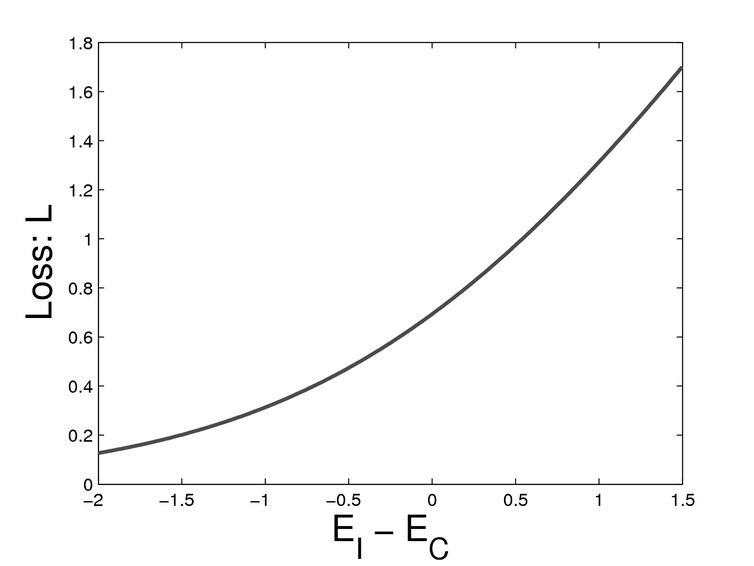 This loss combines the square of the energy with a square hinge. The combination tries to minimize the energy and but enforce margin at least $m$ on the most offending incorrect answer. This is very similar to the loss used in Siamese nets.

There are a whole bunch. Here is a summary of good and bad loss functions.

The right-hand column indicates if the energy function enforces a margin. The plain old energy loss does not push up anywhere, so it doesn’t have a margin. The energy loss doesn’t work for every problem. The perceptron loss works if you have a linear parametrisation of your energy but not in general. Some of them have a finite margin like the hinge loss, and some have an infinite margin like the soft hinge.

Q: How is the most offending incorrect answer found $\bar Y_i$ found in the continuous case?

A: You want to push up on a point that is sufficiently far from $Y^i$, because if it’s too close, the parameters may not move much since the function defined by a neural net is “stiff”. But in general, this is hard and this is the problem that methods selecting contrastive samples try to solve. There’s no single correct way to do it.

We assume that $Y$ is discrete, but if it were continuous, the sum would be replaced by an integral. Here, $E(W, Y^i,X^i)-E(W,y,X^i)$ is the difference of $E$ evaluated at the correct answer and some other answer. $C(Y^i,y)$ is the margin, and is generally a distance measure between $Y^i$ and $y$. The motivation is that the amount we want to push up on a incorrect sample $y$ should depend on the distance between $y$ and the correct sample $Y_i$. This can be a more difficult loss to optimize.