In today’s lecture, we will review some important activation functions and their implementations in PyTorch. They came from various papers claiming these functions work better for specific problems. 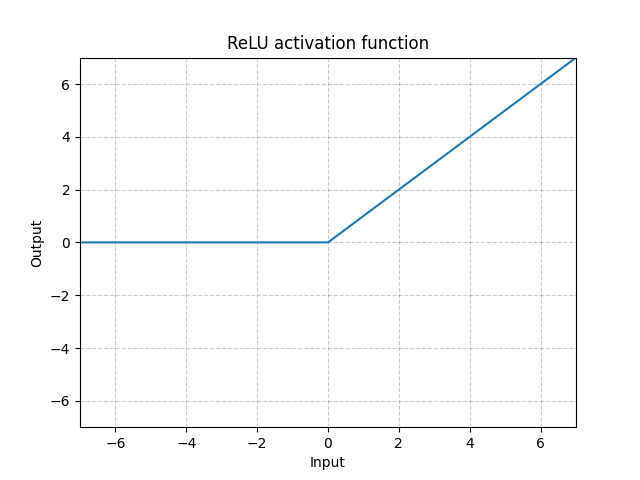 There are variations in ReLU. The Random Relu (RReLU) is defined as follows.

Note that for RReLU, $a$ is a random variable that keeps samplings in a given range during training, and remains fixed during testing. For PReLU , $a$ is also learned. For Leaky ReLU, $a$ is fixed. 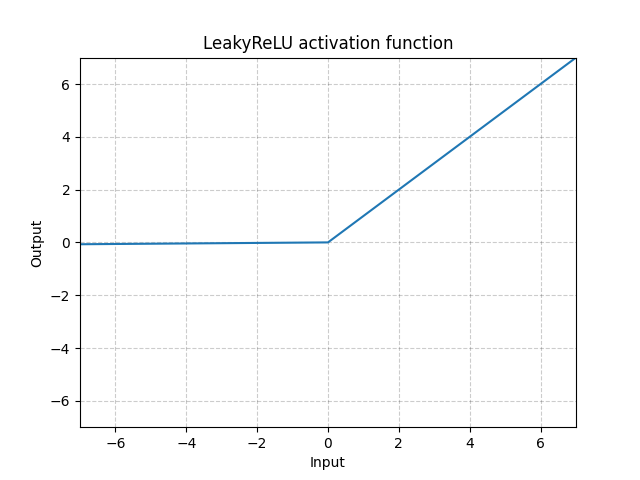 Here $a$ is a fixed parameter. The bottom part of the equation prevents the problem of dying ReLU which refers to the problem when ReLU neurons become inactive and only output 0 for any input. Therefore, its gradient is 0. By using a negative slope, it allows the network to propagate back and learn something useful.

LeakyReLU is necessary for skinny network, which is almost impossible to get gradients flowing back with vanila ReLU. With LeakyReLU, the network can still have gradients even we are in the region where everything is zero out.

Here $a$ is a learnable parameter. 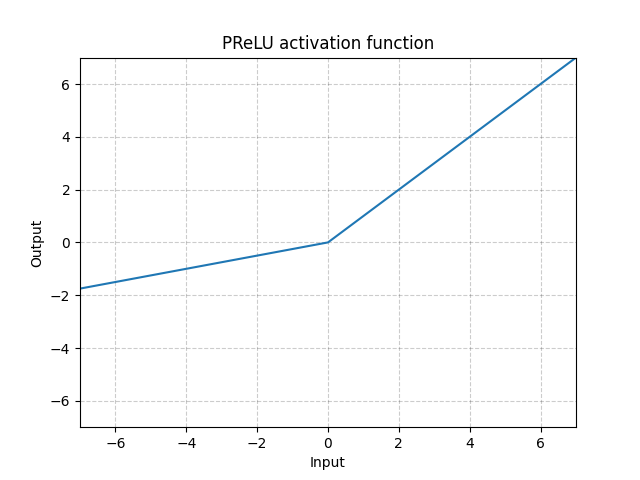 The above activation functions (i.e. ReLU, LeakyReLU, PReLU) are scale-invariant. 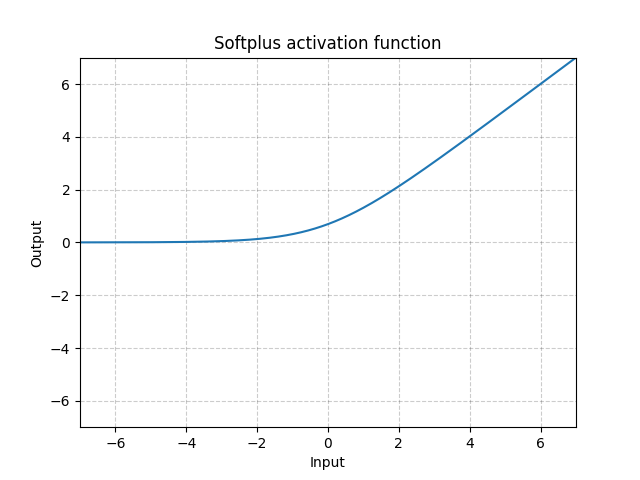 SoftPlus is a smooth approximation to the ReLU function and can be used to constrain the output of a machine to always be positive.

The function will become more like ReLU, if the $\beta$ gets larger and larger. 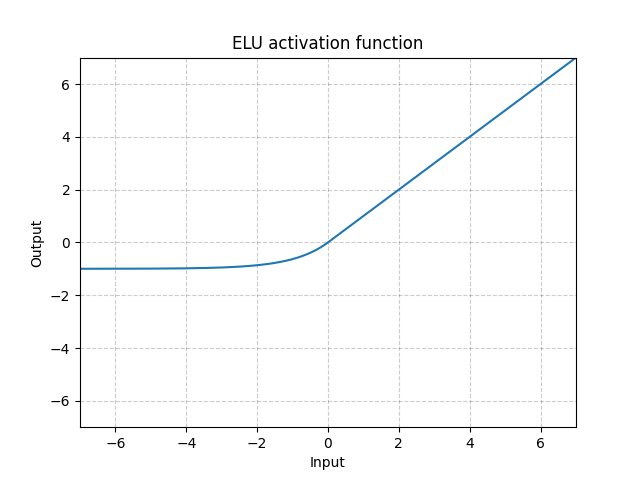 Unlike ReLU, it can go below 0 which allows the system to have average output to be zero. Therefore, the model may converge faster. And its variations (CELU, SELU) are just different parametrizations. 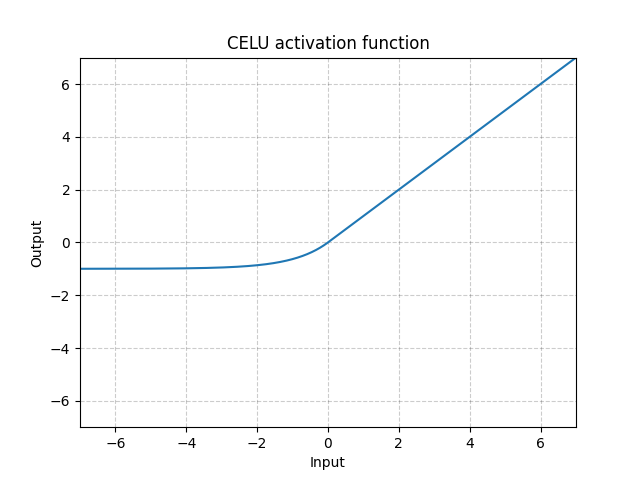 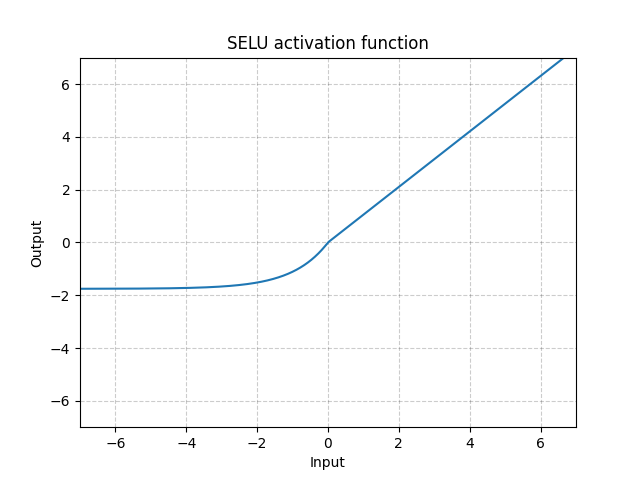 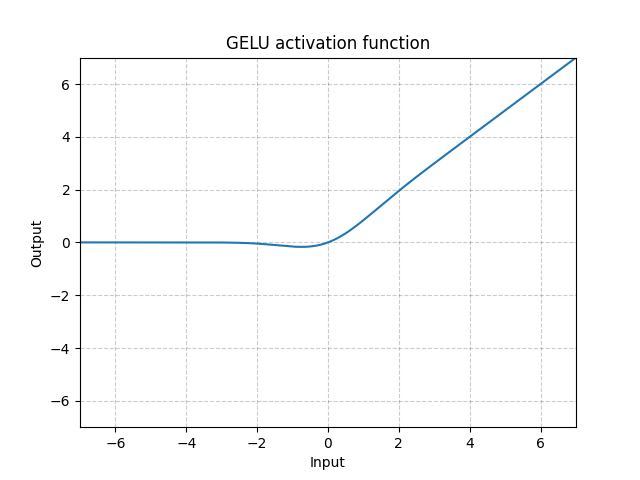 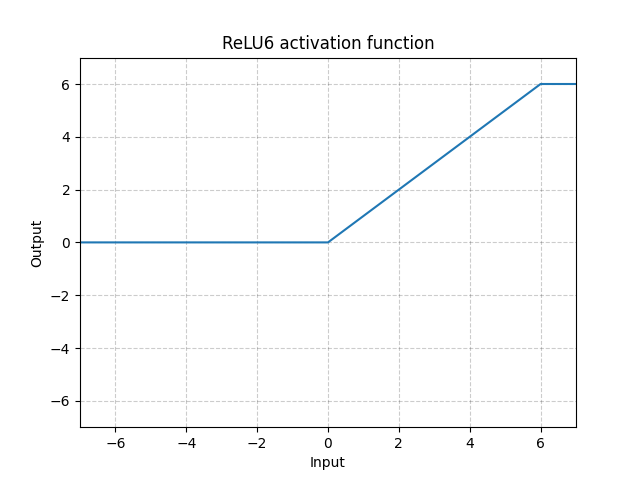 This is ReLU satuaring at 6. But there is no particular reason why picking 6 as saturation, so we can do better by using Sigmoid function below. 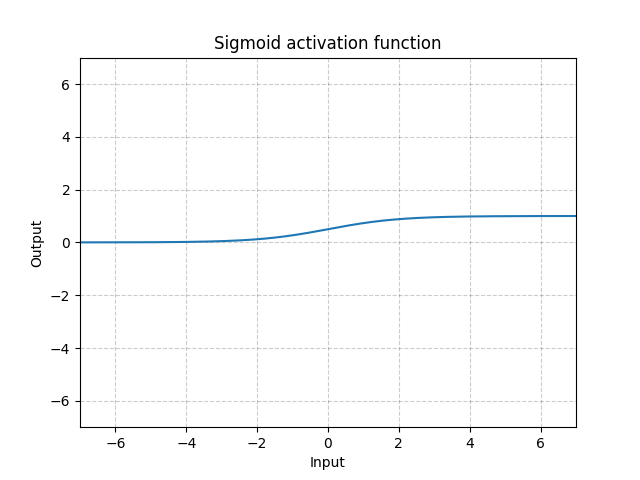 If we stack sigmoids in many layers, it may be inefficient for the system to learn and requires careful initialization. This is because if the input is very large or small, the gradient of the sigmoid function is close to 0. In this case, there is no gradient flowing back to update the parameters, known as saturating gradient problem. Therefore, for deep neural networks, a single kink function (such as ReLU) is preferred. 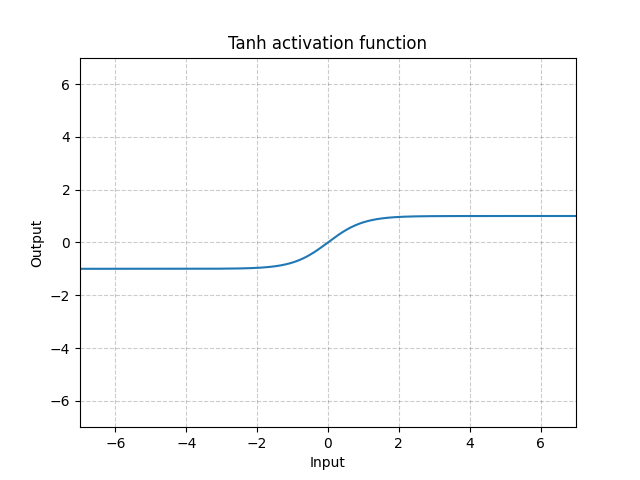 Tanh is basically idential to Sigmoid except it is centered, ranging from -1 to 1. The output of the function will have roughly zero mean. Therefore, the model will converge faster. Note that convergence is usually faster if the average of each input variable is close to zero. One example is Batch Normalization. 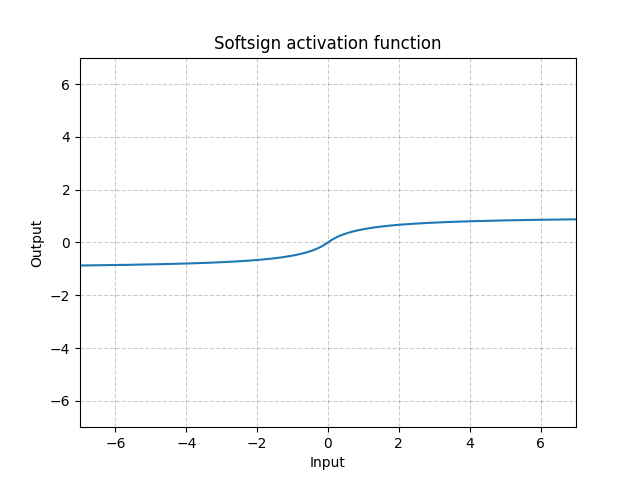 It is similar to the Sigmoid function but gets to the asymptote slowly and alleviate the gradient vanishing problem (to some extent).

The range of the linear region [-1, 1] can be adjusted using min_val and max_val. 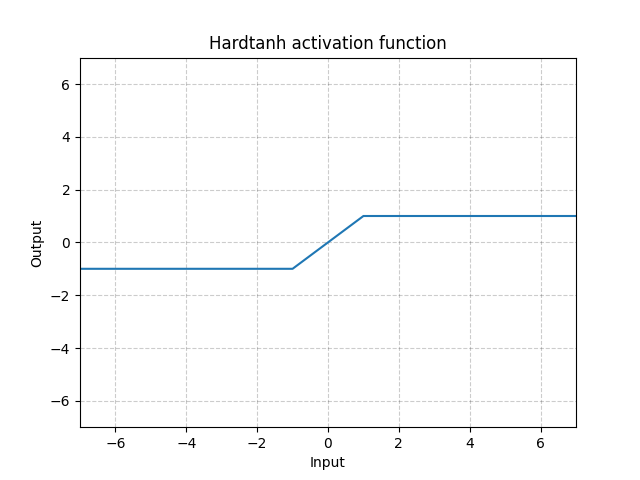 It works surprisingly well esepcially when weights are kept within the small value range.

It is rarely used because we cannot propagate the gradient back. And it is also the reason preventing people from using back-propagation in 60s and 70s when they were using binary neurons. 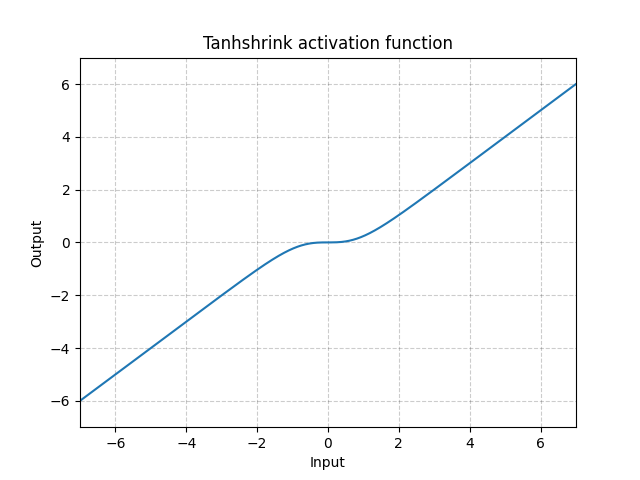 It is rarely used except for sparse coding to compute the value of the latent variable. 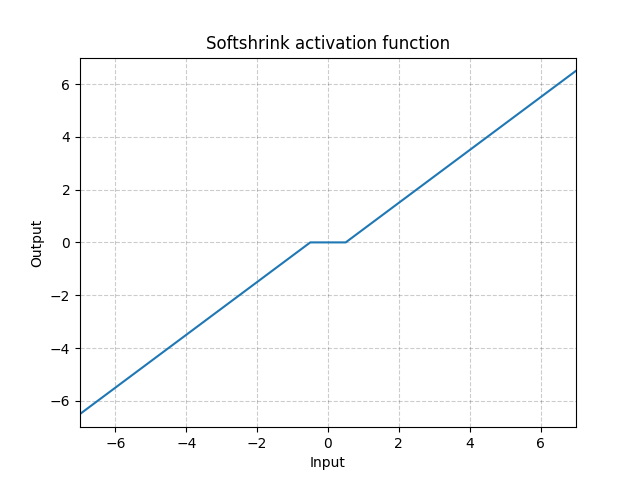 This basically shrinks the variable by a constant towards 0, and forces to 0 if the variable is close to 0. You can think of it as a step of gradient for the $\ell_1$ criteria. It is also one of the step of the Iterative Shrinkage-Thresholding Algorithm (ISTA). But it is not commonly used in standard neural network as activations. 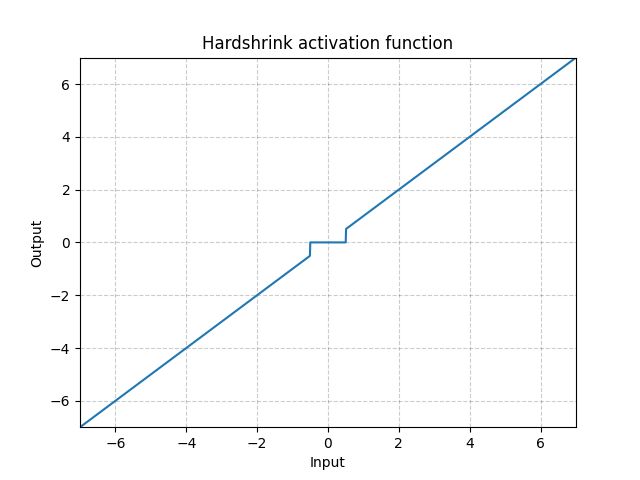 It is rarely used except for sparse coding. 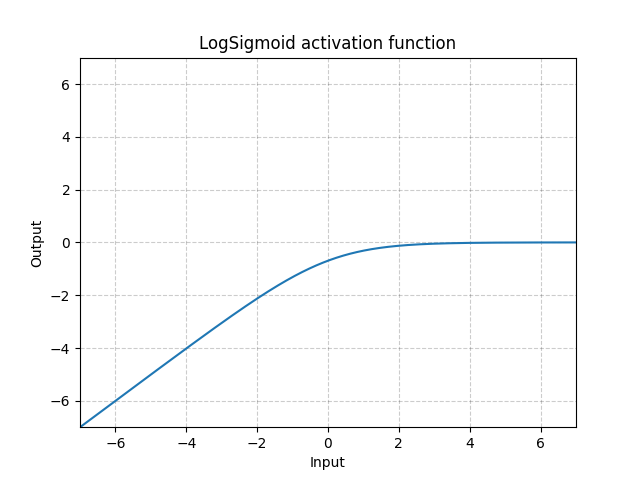 It is mostly used in the loss function but not common for activations.

It turns numbers into a probability distribution.

It is mostly used in the loss function but not common for activations.

Temperature coefficient in a softmax function

Pytorch also has a lot of loss functions implemented. Here we will go through some of them.

This function gives the mean squared error (squared L2 norm) between each element in the input $x$ and target $y$. It is also called L2 loss.

If we are using a minibatch of $n$ samples, then there are $n$ losses, one for each sample in the batch. We can tell the loss function to keep that loss as a vector or to reduce it.

If unreduced (i.e. set reduction='none'), the loss is , where $N$ is the batch size, $x$ and $y$ are tensors of arbitrary shapes with a total of n elements each.

The reduction options are below (note that the defualt value is reduction='mean').

The sum operation still operates over all the elements, and divides by $n$.

The division by $n$ can be avoided if one sets reduction = 'sum'.

This measures the mean absolute error (MAE) betwen each element in the input $x$ and target $y$ (or the actual output and desired output).

If unreduced (i.e. set reduction='none'), the loss is , where $N$ is the batch size, $x$ and $y$ are tensors of arbitrary shapes with a total of n elements each.

It also has reduction option of 'mean' and 'sum' similar to what nn.MSELoss() have.

Use Case: L1 loss is more robust against outliers and noise compared to L2 loss. In L2 the errors of those outlier/noisy points are squared, so the cost function gets very sensitive to outliers.

Problem: The L1 loss is not differentiable at the bottom (0). We need to be careful when haddling it’s gradients (namely softshrink). This motivates the following SmoothL1Loss

This function uses L2 loss if the absolute element-wise error falls below 1 and L2 loss otherwise.

It also has reduction options.

This is advertised by Ross Girshick (Fast R-CNN). The Smooth L1 Loss is also known as the Huber Loss or the Elastic Network when used as an objective function,.

Use Case: It is less sensitive to outliers than the MSELoss and is smooth at the bottom. This function is often used in computer vision for protecting against outliser.

Problem: This function has a scale ($0.5$ in the function above).

L1 vs. L2 for Computer Vision

In making predictions when we have a lot of different $y$’s:

It is the negative log likelihood loss used when training a classification problem with C classes.

Note that, mathematically, the input of NLLLoss should be (log) likelihoods, but Pytorch doesn’t enforce that. So the effect is to make the desired component as large as possible.

The unreduced (i.e. with :attr:reduction set to 'none') loss can be described as:

If reduction is not 'none' (default 'mean'), then

This loss function has an optional argument weight that can be passed in using a 1D Tensor assigning weight to each of the classas. This is useful when dealing with imbalanced training set.

Weight vector is useful if the frequency is different for each category/class. For example, the frequency of the common flu is much higher than the lung cancer. We can simply increase the weight for categories that has small number of samples.

However, instead of setting the weight, it’s better to equalize the frequency in training so that we can exploits stochastic gradients better.

To equalize the classes in training, we put samples of each class in a different buffer. Then generate each minibatch by picking the same number samples from each buffer. When the smaller buffer runs out of samples to use, we iterate through the smaller buffer from the beginning again until every sample of the larger class is used. This way gives us equal frequency for all categories by going through those circular buffers. We should never go the easy way to equalize frequency by not using all samples in the majority class. Don’t leave data on the floor!

An obvious problem of the above method is that our NN model wouldn’t know the relative frequency of the actual samples. To solve that, we fine-tune the system by running a few epochs at the end with the actual class frequency, so that the system adapts to the biases at the output layer to favor things that are more frequent.

To get an intuition of this scheme, let’s go back to the medical school example: students spend just as much time on rare disease as they do on frequent diseases (or maybe even more time, since the rare diseases are often the more complex ones). They learn to adapt to the features of all of them, then correct it to know which are rare.

This function combines nn.LogSoftmax and nn.NLLLoss in one single class. The combination of the two makes the score of the correct class as large as possible.

The reason why the two functions are merged here is for numerical stability of gradient computation. When the value after softmax is close to 1 or 0, the log of that can get close to 0 or $-\infty$. Slope of log close to 0 is close to $\infty$, causing the intermediate step in backpropagation to have numerical issues. When the two functions are combined, the gradients is saturated so we get a reasonbale number at the end.

The input is expected to be unnormalized score for each class.

The loss can be described as:

or in the case of the weight argument being specified:

The losses are averaged across observations for each minibatch.

A physical interpretation of the Cross Entropy Loss is related to the Kullback–Leibler divergence (KL divergence), where we are measuring the divergence between two distributions. Here, the (quasi) distributions are represented by the x vector (predictions) and the target distribution (a one-hot vector with 0 on the wrong classes and 1 on the right class).

Mathematically, , where is the cross-entropy (between two distributions), is the entropy, and is the KL divergence.

This is an efficient softmax approximation of softmax for large number of classes (for example, millions of classes). It implements trciks to improve the speed of the computation.