In the past decade, one of the major success recipes for many different Computer Vision problems has been learning visual representations by performing supervised learning for ImageNet classification. And, using these learned representations, or learned model weights as initialization for other computer vision tasks, where a large quantum of labelled data might not be available.

However, getting annotations for a dataset of the magnitude of ImageNet is immensely time-consuming and expensive. Example: ImageNet labelling with 14M images took roughly 22 human years.

Because of this, the community started to look for alternate labelling processes, such as hashtags for social media images, GPS locations, or self-supervised approaches where the label is a property of the data sample itself.

But an important question that arises before looking for alternate labelling processes is:

How much labelled data can we get after all? 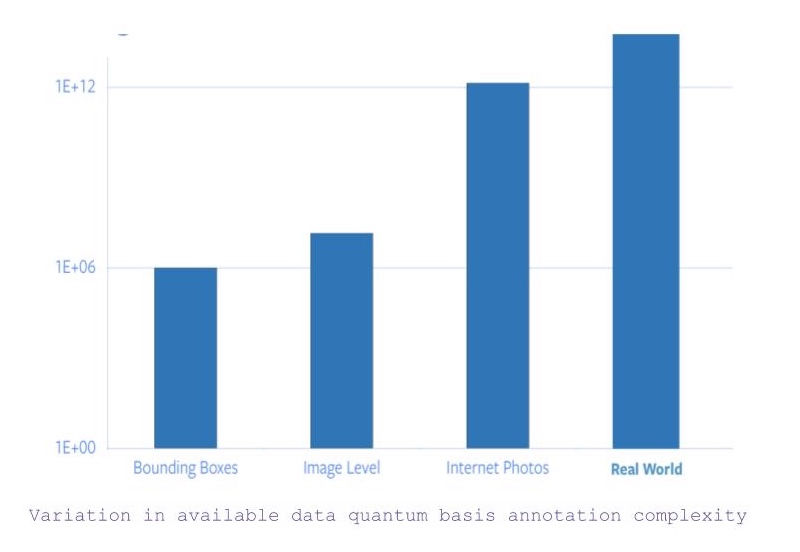 Hence, drawing from the fact that ImageNet specific annotation alone took 22 human years worth of time, scaling labelling to all internet photos or beyond is completely infeasible.

Generally, the plot presenting distribution of the labels for internet images looks like a long tail. That is, most of the images correspond to very few labels, while there exist a large number of labels for which not many images are present. Thus, getting annotated samples for categories towards the end of the tail requires huge quantities of data to be labelled because of the nature of the distribution of categories. 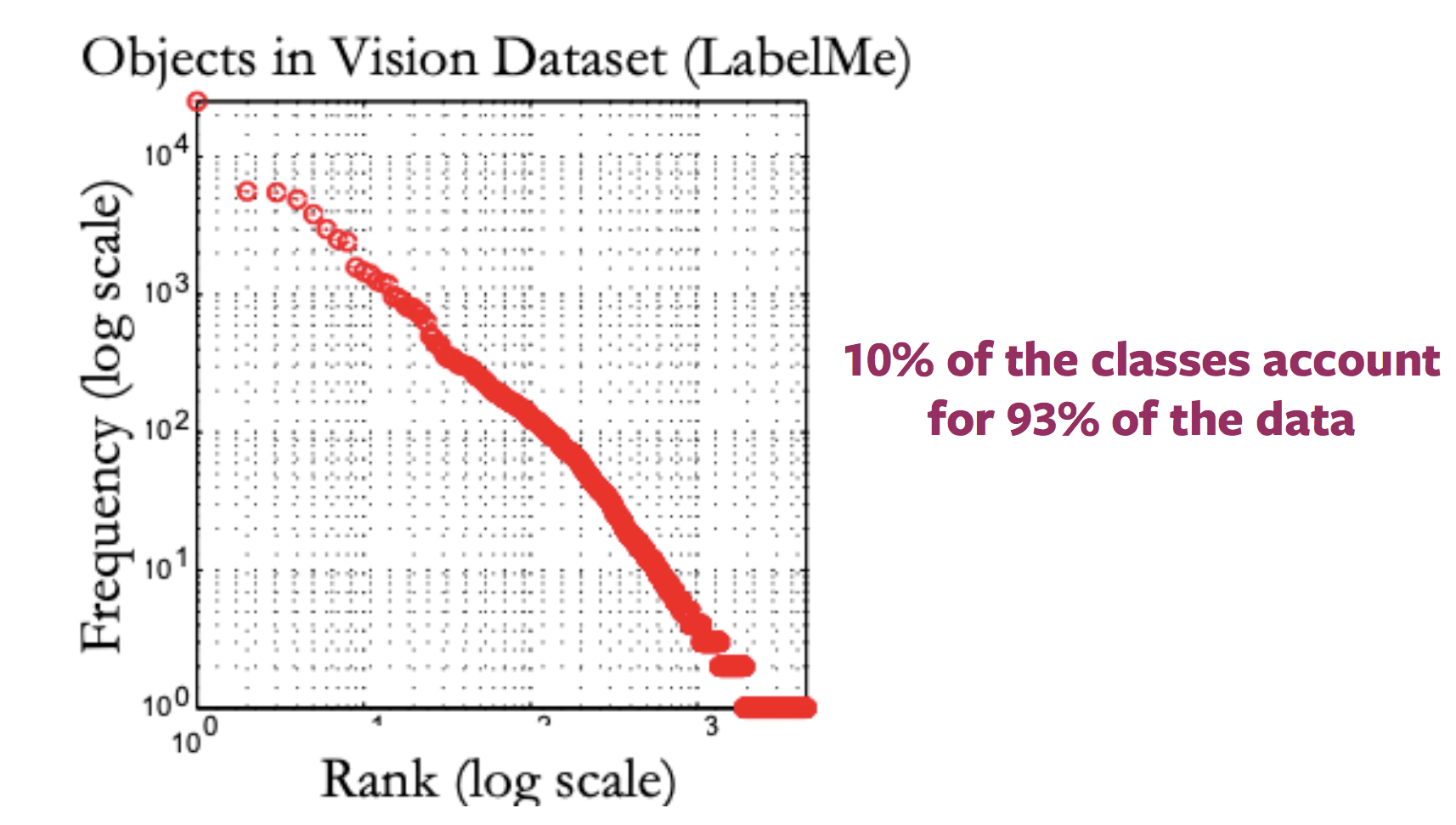 Figure 2: Variation in distribution of available images with labels

What is self-supervised Learning? 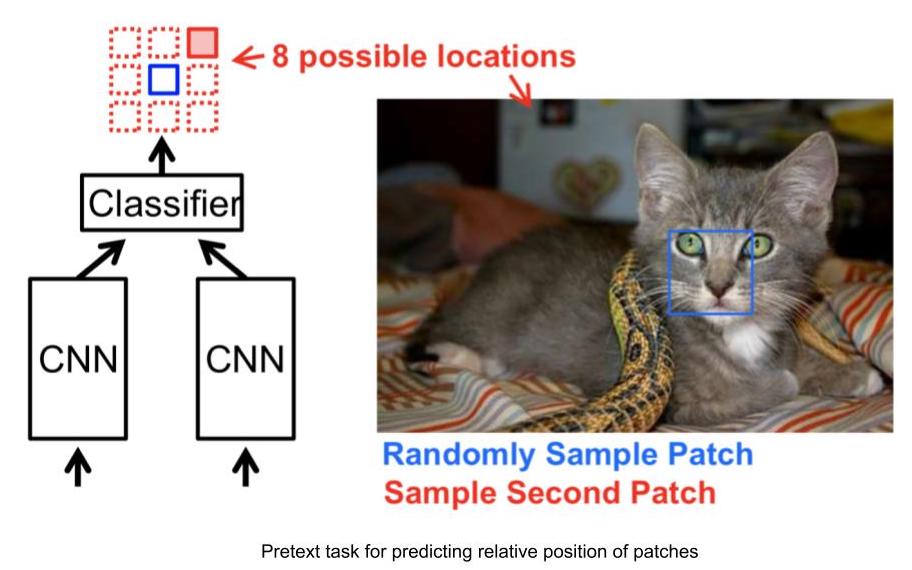 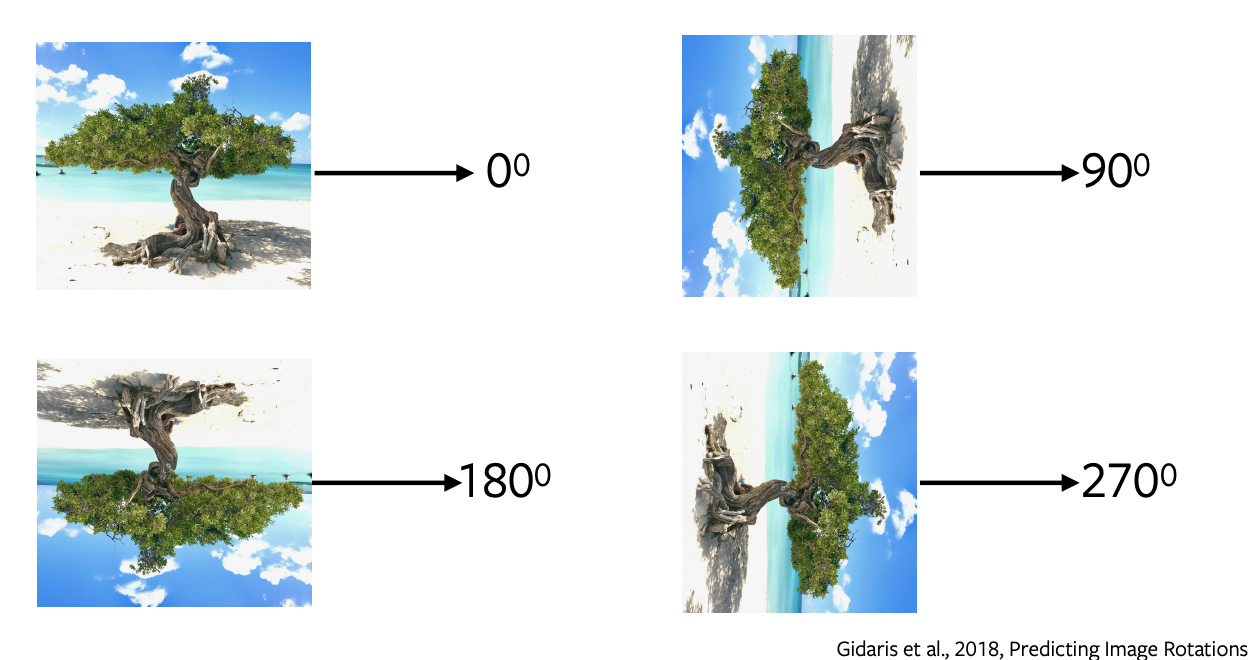 Why rotation helps or why it works?

It has been proven that it works empirically. The intuition behind it is that in order to predict the rotations, model needs to understand the rough boundaries and representation of an image. For example, it will have to segregate the sky from water or sand from the water or will understand that trees grow upwards and so on.

In this pretext task, we predict the colours of a grey image. It can be formulated for any image, we just remove the colour and feed this greyscale image to the network to predict its colour. This task is useful in some respects like for colourising the old greyscale films [//]: <> (we can apply this pretext task). The intuition behind this task is that the network needs to understand some meaningful information like that the trees are green, the sky is blue and so on.

It is important to note that colour mapping is not deterministic, and several possible true solutions exist. So, for an object if there are several possible colours then the network will colour it as grey which is the mean of all possible solutions. There have been recent works using Variational Auto Encoders and latent variables for diverse colourisation.

Fill in the blanks

We hide a part of an image and predict the hidden part from the remaining surrounding part of the image. This works because the network will learn the implicit structure of the data like to represent that cars run on roads, buildings are composed of windows & doors and so on.

Videos are composed of sequences of frames and this notion is the idea behind self-supervision, which can be leveraged for some pretext tasks like predicting the order of frames, fill in the blanks and object tracking. 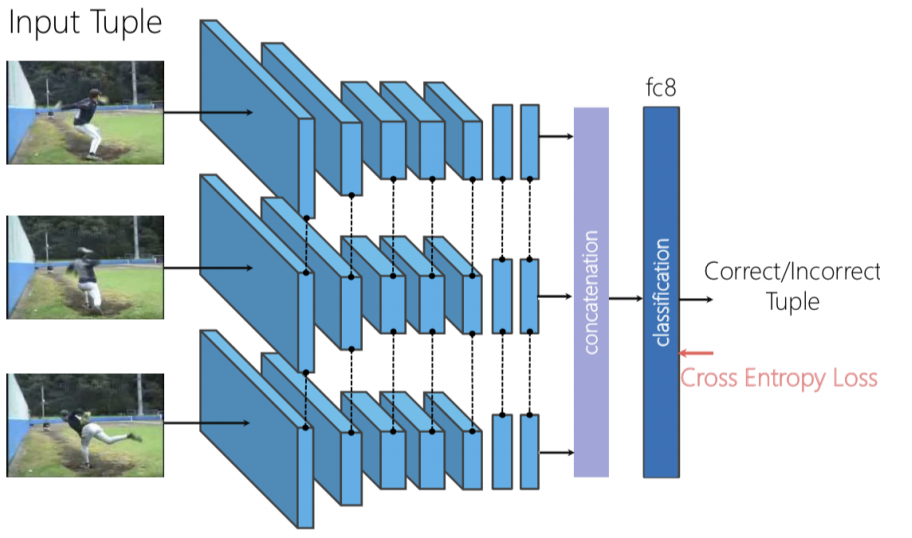 We can use a triplet Siamese network, where the three frames are independently fed forward and then we concatenate the generated features and perform the binary classification to predict if the frames are shuffled or not. 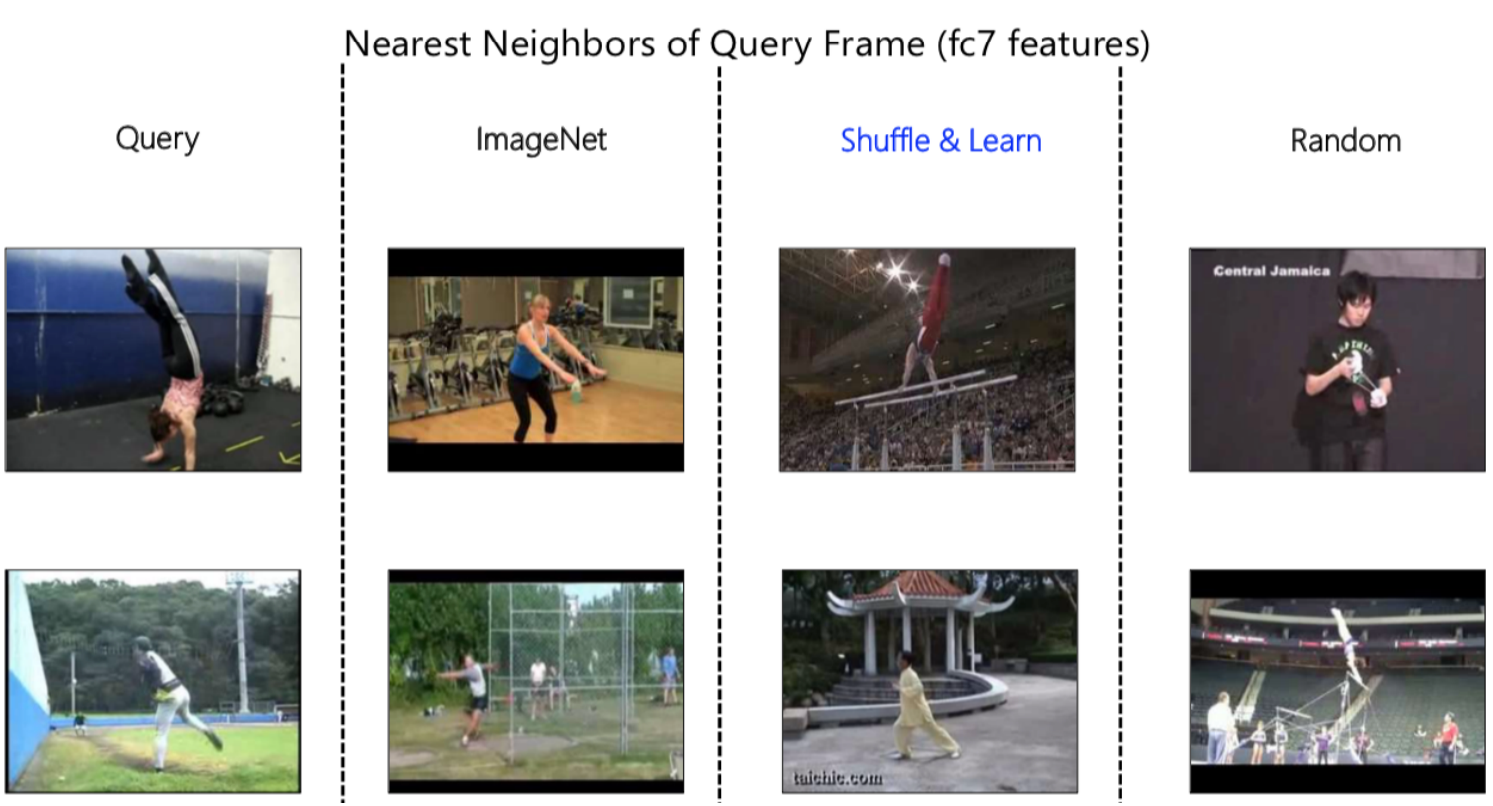 Again, we can use the Nearest Neighbours algorithm to visualize what our networks are learning. In fig. 9 above, first we have a query frame which we feed-forward to get a feature representation and then look at the nearest neighbours in the representation space. While comparing, we can observe a stark difference between neighbours obtained from ImageNet, Shuffle & Learn and Random.

On observing Shuffle & Learn, it is not immediately clear whether it is focusing on the colour or on the semantic concept. After further inspection and observing various examples, it was observed that it is looking at the pose of the person. For example, in the first image the person is upside down and in second the feet are in a particular position similar to query frame, ignoring the scene or background colour. The reasoning behind this is that our pretext task was predicting whether the frames are in the right order or not, and to do this the network needs to focus on what is moving in the scene, in this case, the person.

It was verified quantitatively by fine-tuning this representation to the task of human key-point estimation, where given a human image we predict where certain key points like nose, left shoulder, right shoulder, left elbow, right elbow, etc. are. This method is useful for tracking and pose estimation.

In figure 10, we compare the results for supervised ImageNet and Self-Supervised Shuffle & Learn on FLIC and MPII datasets and we can see that Shuffle and Learn gives good results for key point estimation.

Pretext Tasks for videos and sound

Video and Sound are multi-modal where we have two modalities or sensory inputs one for video and one for sound. Where we try to predict whether the given video clip corresponds to the audio clip or not. 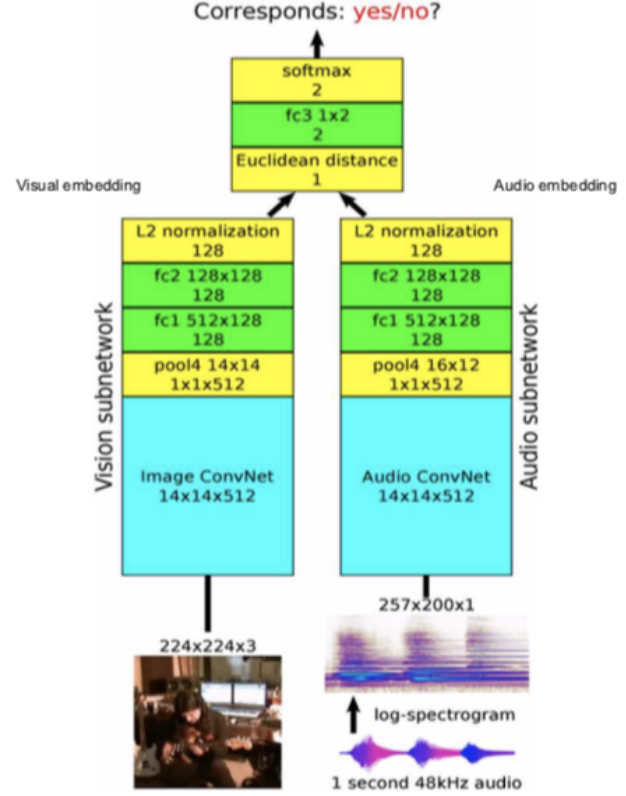 Architecture: Pass the video frames to the vision subnetwork and pass the audio to the audio subnetwork, which gives 128-dimensional features and embeddings, we then fuse them together and solve it as a binary classification problem predicting if they correspond with each other or not.

It can be used to predict what in the frame might be making a sound. The intuition is if it is the sound of a guitar, the network roughly needs to understand how the guitar looks and same should be true for drums.

Understanding what the “pretext” task learns 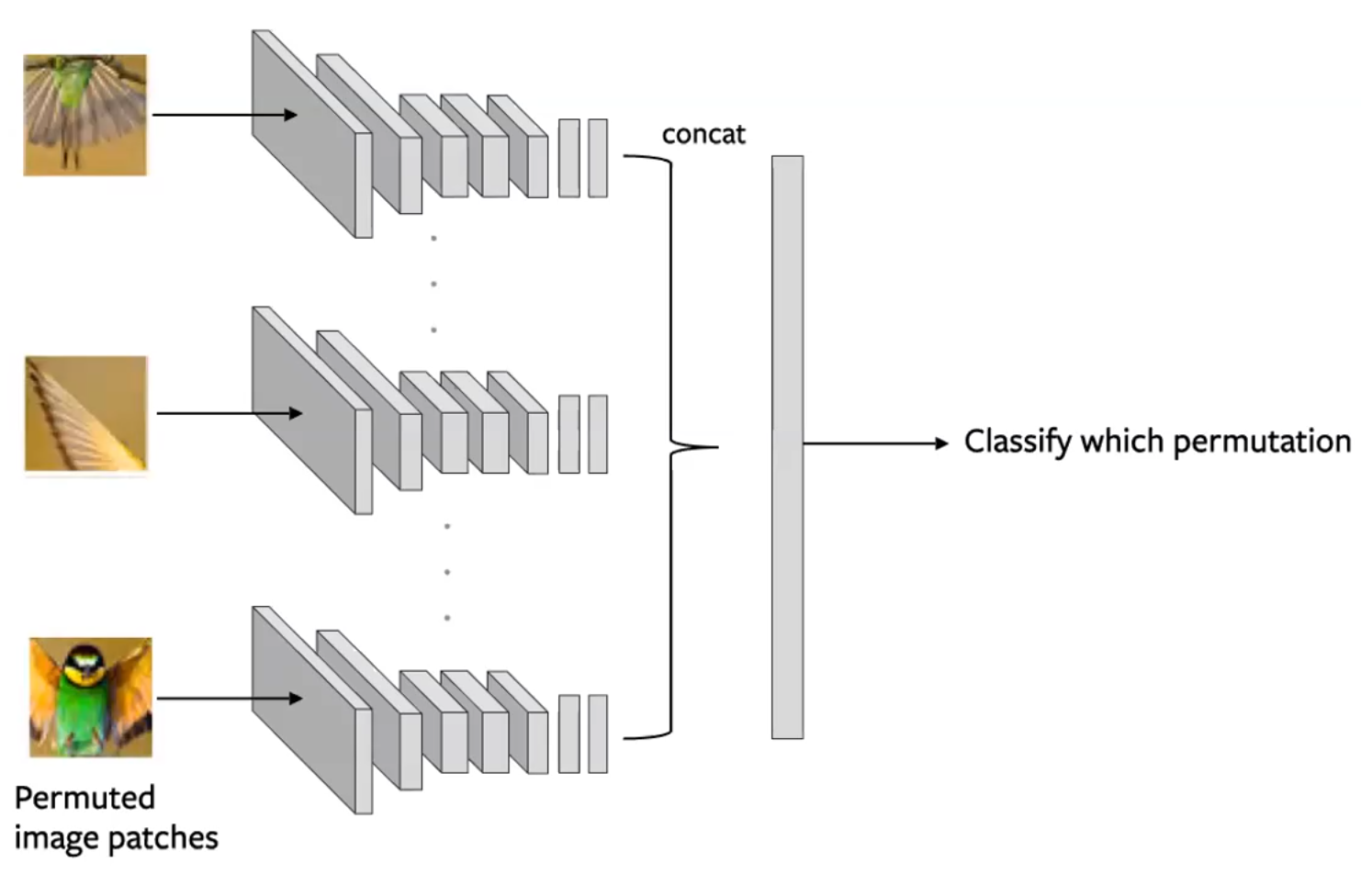 Figure 14: Siamese network architecture for a Jigsaw pretext task. Each tile is passed through independently, with encodings concatenated to predict a permutation. (Misra)

This form of evaluation is a kind of Transfer Learning.

A good representation should transfer with a little training.