In the previous lecture, we demonstrated that a convolutional network can recognize digits, however, the question remains, how does the model pick each digit and avoid perturbation on neighboring digits. The next step is to detect non/overlapping objects and use the general approach of Non-Maximum Suppression (NMS). Now, given the assumption that the input is a series of non-overlapping digits, the strategy is to train several convolutional networks and using either majority vote or picking the digits corresponding to the highest score generated by the convolutional network.

Here we present the task of recognizing 5 non-overlapping zip codes. The system was not given any instructions on how to separate each digit but knows that is must predict 5 digits. The system (Figure 1) consists of 4 different sized convolutional networks, each producing one set of outputs. The output is represented in matrices. The four output matrices are from models with a different kernel width in the last layer. In each output, there are 10 rows, representing 10 categories from 0 to 9. The larger white square represents a higher score in that category. In these four output blocks, the horizontal sizes of the last kernel layers are 5, 4, 3 and 2 respectively. The size of the kernel decides the width of the model’s viewing window on the input, therefore each model is predicting digits based on different window sizes. The model then takes a majority vote and selects the category that corresponds to the highest score in that window. To extract useful information, one should keep in mind that not all combinations of characters are possible, therefore error correction leveraging input restrictions is useful to ensure the outputs are true zip codes. 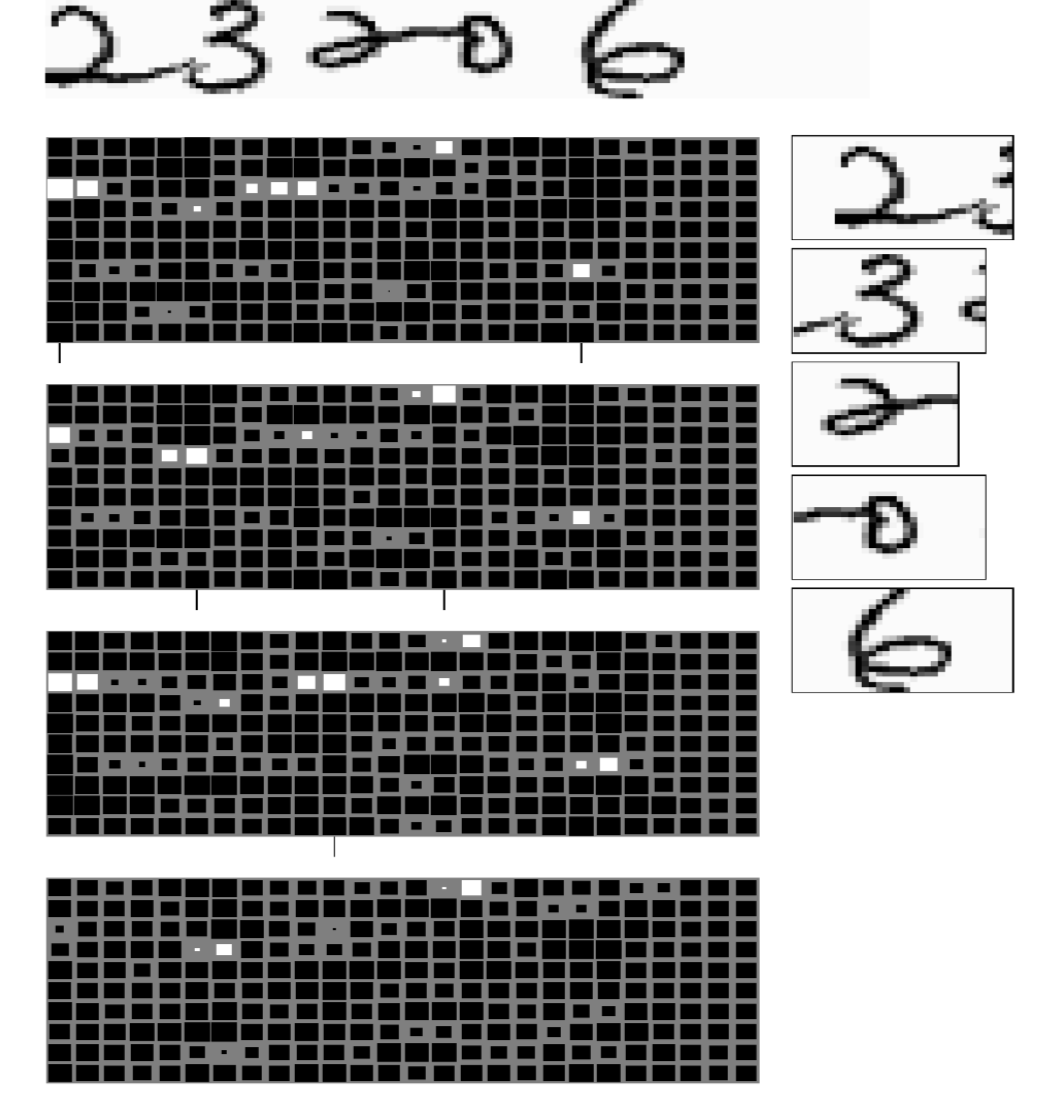 Now to impose the order of the characters. The trick is to utilize a shortest path algorithm. Since we are given ranges of possible characters and the total number of digits to predict, We can approach this problem by computing the minimum cost of producing digits and transitions between digit. The path has to be continuous from the lower left cell to the upper right cell on the graph, and the path is restricted to only contain movements from left to right and bottom to top. Note that if the same number is repeated next to each other, the algorithm should be able to distinguish there are repeated numbers instead of predicting a single digit.

Convolutional neural networks perform well on detection tasks and face detection is no exception. To perform face detection we collect a dataset of images with faces and without faces, on which we train a convolutional net with a window size such as 30 $\times$ 30 pixels and ask the network to tell whether there is a face or not. Once trained, we apply the model to a new image and if there are faces roughly within a 30 $\times$ 30 pixel window, the convolutional net will light up the output at the corresponding locations. However, two problems exist. 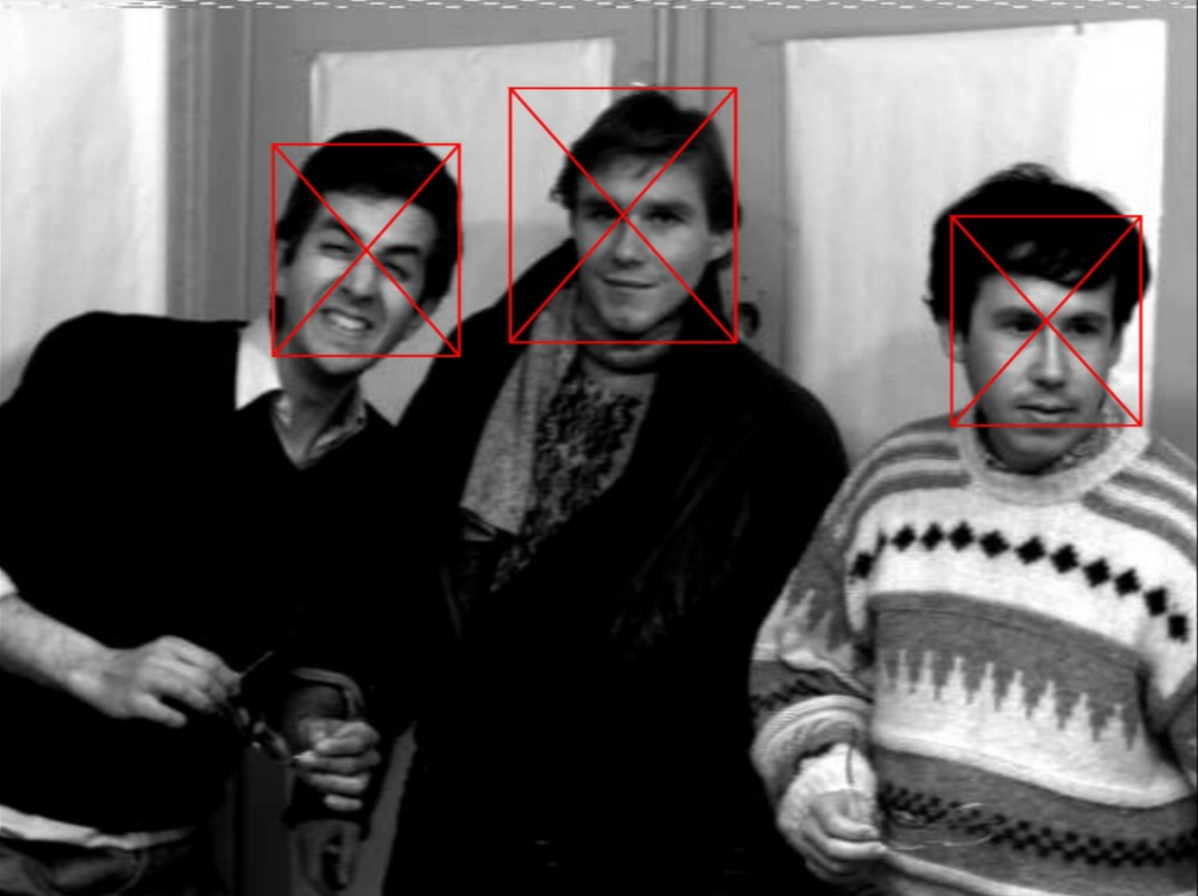 The maps shown in (Figure 3) indicate the scores of face detectors. This face detector recognizes faces that are 20 $\times$ 20 pixels in size. In fine-scale (Scale 3) there are many high scores but are not very definitive. When the scaling factor goes up (Scale 6), we see more clustered white regions. Those white regions represent detected faces. We then apply non-maximum suppression to get the final location of the face.

For each high-scoring region, there is probably a face underneath. If more faces are detected very close to the first, it means that only one should be considered correct and the rest are wrong. With non-maximum suppression, we take the highest-scoring of the overlapping bounding boxes and remove the others. The result will be a single bounding box at the optimum location.

In the last section, we discussed how the model may run into a large number of false positives at test time as there are many ways for non-face objects to appear similar to a face. No training set will include all the possible non-face objects that look like faces. We can mitigate this problem through negative mining. In negative mining, we create a negative dataset of non-face patches which the model has (erroneously) detected as faces. The data is collected by running the model on inputs that are known to contain no faces. Then we retrain the detector using the negative dataset. We can repeat this process to increase the robustness of our model against false positives.

Semantic segmentation is the task of assigning a category to every pixel in an input image.

In this project, the goal was to label regions from input images so that a robot can distinguish between roads and obstacles. In the figure, the green regions are areas the robot can drive on and the red regions are obstacles like tall grass. To train the network for this task, we took a patch from the image and manually label it traversable or not (green or red). We then train the convolutional network on the patches by asking it to predict the color of the patch. Once the system is sufficiently trained, it is applied to the entire image, labeling all the regions of the image as green or red.

Stereo Labels (Figure 4, Column 2) Images are captured by the 4 cameras on the robot, which are grouped into 2 stereo vision pairs. Using the known distances between the stereo pair cameras, the positions of every pixel in 3D space are then estimated by measuring the relative distances between the pixels that appear in both the cameras in a stereo pair. This is the same process our brains use to estimate the distance of the objects that we see. Using the estimated position information, a plane is fit to the ground, and pixels are then labeled as green if they are near the ground and red if they are above it.

The model outputs a label for every pixel in the image up to the horizon. These are classifier outputs of a multi-scale convolutional network.

When trying to get to a GPS coordinate on the other side of a barrier, the robot “saw” the barrier from far away and planned a route that avoided it. This is thanks to the CNN detecting objects up 50-100m away.

Back in the 2000s, computation resources were restricted. The robot was able to process around 1 frame per second, which means it would not be able to detect a person that walks in its way for a whole second before being able to react. The solution for this limitation is a Low-Cost Visual Odometry model. It is not based on neural networks, has a vision of ~2.5m but reacts quickly.

In this task, the model outputs an object category (buildings, cars, sky, etc.) for every pixel. The architecture is also multi-scale (Figure 6).

Notice that if we back project one output of the CNN onto the input, it corresponds to an input window of size $46\times46$ on the original image at the bottom of the Laplacian Pyramid. It means we are using the context of $46\times46$ pixels to decide the category of the central pixel.

However, sometimes this context size is not enough to determine the category for larger objects.

The multiscale approach enables a wider vision by providing extra rescaled images as inputs. The steps are as follows:

Performance: With no post-processing and running frame-by-frame, the model runs very fast even on standard hardware. It has a rather small size of training data (2k~3k), but the results are still record-breaking.