Proto-CNNs and evolution to modern CNNs

Inspired by Fukushima’s work on visual cortex modelling, using the simple/complex cell hierarchy combined with supervised training and backpropagation lead to the development of the first CNN at University of Toronto in ‘88-‘89 by Prof. Yann LeCun. The experiments used a small dataset of 320 ‘mouser-written’ digits. Performances of the following architectures were compared:

The most successful networks (constrained network with shared weights) had the strongest generalizability, and form the basis for modern CNNs. Meanwhile, singler FC layer tends to overfit.

After moving to Bell Labs, LeCunn’s research shifted to using handwritten zipcodes from the US Postal service to train a larger CNN:

The next year, some changes were made: separate pooling was introduced. Separate pooling is done by averaging input values, adding a bias, and passing to a nonlinear function (hyperbolic tangent function). The 2$\times$2 pooling was performed with a stride of 2, hence reducing resolutions by half.

An example of a single convolutional layer would be as follows:

The first-layer, simple convolution/pool combinations usually detect simple features, such as oriented edge detections. After the first convolution/pool layer, the objective is to detect combinations of features from previous layers. To do this, steps 2 to 4 are repeated with multiple kernels over previous-layer feature maps, and are summed in a new feature map:

To generate an output, the last layer of convolution is conducted, which seems like a full connections but indeed is convolutional.

See this animation on Andrej Karpathy’s website on how convolutions change the shape of the next layer’s feature maps. Full paper can be found here.

As demonstrated by the animation on the slides(here’s another example), translating the input image results in same translation of the feature maps. However, the changes in feature maps are scaled by convolution/pooling operations. E.g. the 2$\times$2 pooling with stride 2 will reduce the 1-pixel shift in input layer to 0.5-pixel shift in the following feature maps. Spatial resolution is then exchanged for increased number of feature types, i.e. making the representation more abstract and less sensitive to shifts and distortions.

Generic CNN architecture can be broken down into several basic layer archetypes:

Implementation of LeNet5 in PyTorch

LeNet5 consists of the following layers (1 being the top-most layer):

LeNet5 can be implemented in PyTorch with the following code:

The same code can be expressed using nn.Sequential, but it is outdated.

Consider a cursive hand-writing recognition system. We do not have to break the input image into segments. We can apply the CNN over the entire image: the kernels will cover all locations in the entire image and record the same output regardless of where the pattern is located. Applying the CNN over an entire image is much cheaper than applying it at multiple locations separately. No prior segmentation is required, which is a relief because the task of segmenting an image is similar to recognizing an image.

LeNet5 is trained on MNIST images of size 32$\times$32 to classify individual digits in the centre of the image. Data augmentation was applied by shifting the digit around, changing the size of the digit, inserting digits to the side. It was also trained with an 11-th category which represented none of the above. Images labelled by this category were generated either by producing blank images, or placing digits at the side but not the centre.

The above image demonstrates that a LeNet5 network trained on 32$\times$32 can be applied on a 32$\times$64 input image to recognise the digit at multiple locations.

What is the feature binding problem?

Visual neural scientists and computer vision people have the problem of defining the object as an object. An object is a collection of features, but how to bind all of the features to form this object?

How to solve it?

We can solve this feature binding problem by using a very simple CNN: only two layers of convolutions with poolings plus another two fully connected layers without any specific mechanism for it, given that we have enough non-linearities and data to train our CNN.

The above animation showcases the ability of CNN to recognize different digits by moving a single stroke around, demonstrating its ability to address feature binding problems, i.e. recognizing features in a hierarchical, compositional way.

We can build a CNN with 2 convolution layers with stride 1 and 2 pooling layers with stride 2 such that the overall stride is 4. Thus, if we want to get a new output, we need to shift our input window by 4. To be more explicit, we can see the figure below (green units). First, we have an input of size 10, and we perform convolution of size 3 to get 8 units. After that, we perform pooling of size 2 to get 4 units. Similarly, we repeat the convolution and pooling again and eventually we get 1 output. 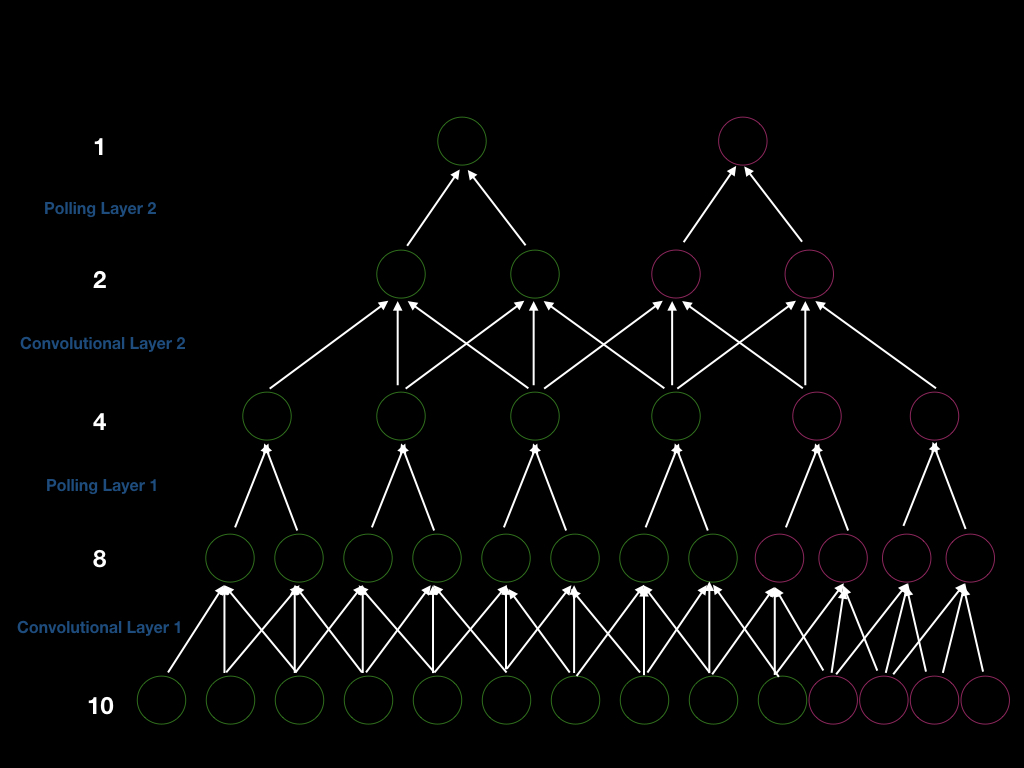 What are CNN good for

CNNs are good for natural signals that come in the form of multidimensional arrays and have three major properties: