What does it mean to perform classification? Consider the case of logistic regression. If logistic regression for classification is applied to this data, it will create a set of linear planes (decision boundaries) in an attempt to separate the data into its classes. The issue with this solution is that in each region, there are points belonging to multiple classes. The branches of the spiral cross the linear decision boundaries. This is not a great solution!

How do we fix this? We transform the input space such that the data are forced to be linearly separable. Over the course of training a neural network to do this, the decision boundaries that it learns will try to adapt to the distribution of the training data.

Note: A neural network is always represented from the bottom up. The first layer is at the bottom, and the last at the top. This is because conceptually, the input data are low-level features for whatever task the neural network is attempting. As the data traverse upward through the network, each subsequent layer extracts features at a higher level.

We will now take a look at what a fully connected (FC) network is, and how it works.

Eqn. 2 Mathematics behind a FC network

A basic neural network such as the one shown above is merely a set of successive pairs, with each pair being an affine transformation followed by a non-linear operation (squashing). Frequently used non-linear functions include ReLU, sigmoid, hyperbolic tangent, and softmax.

The network shown above is a 3-layer network:

Therefore, a $3$-layer neural network has $2$ affine transformations. This can be extrapolated to a $n$-layer network.

Let’s do a case of 3 hidden layers, fully connected in each layer. An illustration can be found in Fig. 5

Let’s consider a neuron $j$ in the second layer. It’s activation is:

Notice that the activation of the input layer in this case is just the identity. The hidden layers can have activations like ReLU, hyperbolic tangent, sigmoid, soft (arg)max, etc.

The activation of the last layer in general would depend on your use case, as explained in this Piazza post. 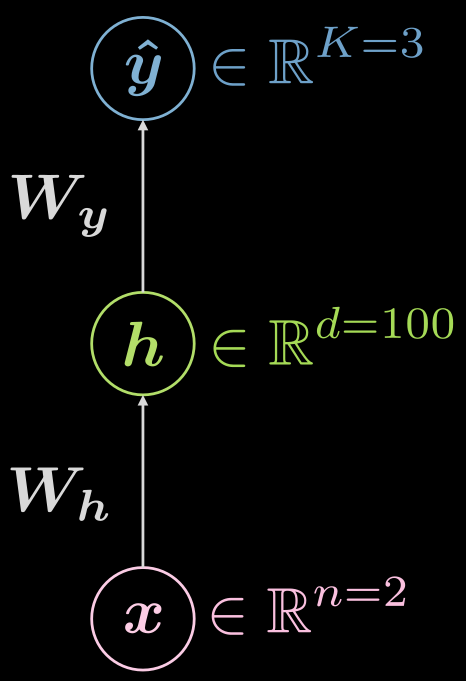 What kind of functions are we looking at?

However, it is helpful to visualize the fact that there is a hidden layer, and the mapping can be expanded as:

What might an example configuration for the case above look like? In this case, one has input of dimension two ($n=2$), the single hidden layer could have dimensionality of 1000 ($d = 1000$), and we have 3 classes ($C=3$). There are good practical reasons to not have so many neurons in one hidden layer, so it could make sense to split that single hidden layer into 3 with 10 neurons each ($1000 \rightarrow 10 \times 10 \times 10$).

So what does typical training look like? It is helpful to formulate this into the standard terminology of losses.

First, let us re-introduce the soft (arg)max and explicitly state that it is a common activation function for the last layer, when using negative log-likelihood loss, in cases for multi-class prediction. As stated by Professor LeCun in lecture, this is because you get nicer gradients than if you were to use sigmoids and square loss. In addition, your last layer will already be normalized (the sum of all the neurons in the last layer come out to 1), in a way that is nicer for gradient methods than explicit normalization (dividing by the norm).

The soft (arg)max will give you logits in the last layer that look like this:

It is important to note that the set is not closed because of the strictly positive nature of the exponential function.

Given the set of the predictions $\matr{\hat{Y}}$, the loss will be:

Here c denotes the integer label, not the one hot encoding representation.

So let’s do two examples, one where an example is correctly classified, and one where it is not.

What is the instance wise loss?

For the case of nearly perfect prediction ($\sim$ means circa):

For the case of nearly absolutely wrong:

Note: It is important to know that if you use CrossEntropyLoss, you will get LogSoftMax and negative loglikelihood NLLLoss bundled together, so don’t do it twice!

For training, we aggregate all trainable parameters – weight matrices and biases – into a collection we call $\mathbf{\Theta} = \lbrace\boldsymbol{W_h, b_h, W_y, b_y} \rbrace$. This allows us to write the objective function or loss as:

This makes the loss depend on the output of the network $\boldsymbol {\hat{Y}} \left( \mathbf{\Theta} \right)$, so we can turn this into an optimization problem.

A simple illustration of how this works can be seen in Fig. 7, where $J(\vartheta)$, the function we need to minimise, has only a scalar parameter $\vartheta$. 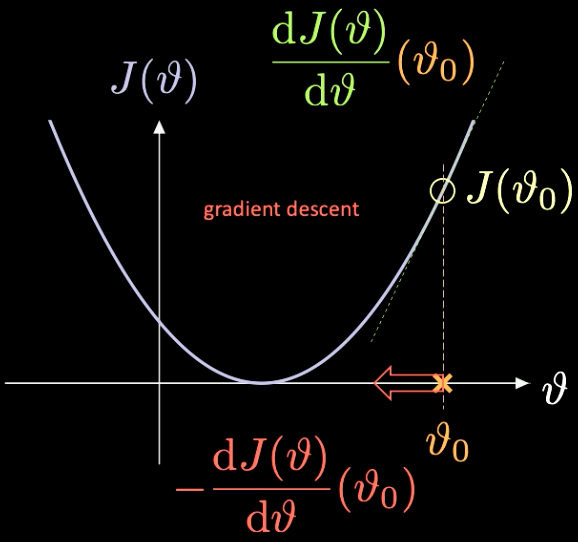 The iterative repetition of this process is known as gradient descent. Gradient methods are the primary tools to train a neural network.

In order to compute the necessary gradients, we have to use back-propagation

The Jupyter notebook can be found here. In order to run the notebook, make sure you have the dl-minicourse environment installed as specified in README.md.

An explanation of how to use torch.device() can be found in last week’s notes.

Like before, we are going to be working with points in $\mathbb{R}^2$ with three different categorical labels - in red, yellow and blue - as can be seen in Fig. 8. 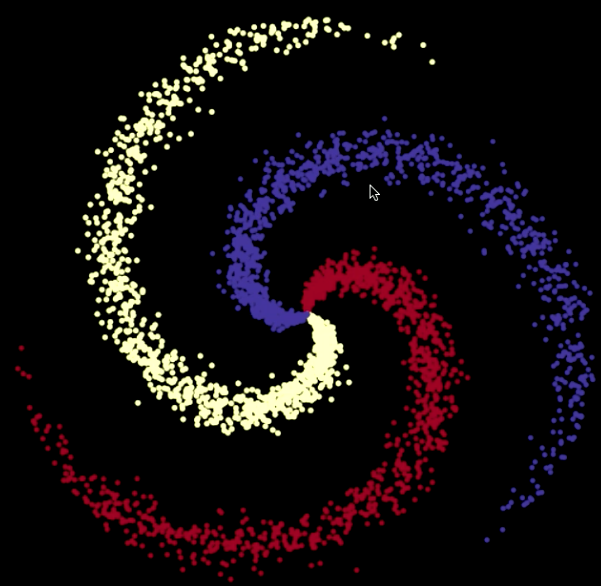 nn.Sequential() is a container, which passes modules to the constructor in the order that they are added; nn.linear() is miss-named as it applies an affine transformation to the incoming data: $\boldsymbol y = \boldsymbol W \boldsymbol x + \boldsymbol b$. For more information, refer to the PyTorch documentation.

As it can be seen in Fig. 9, when trying to separate the spiral data with linear decision boundaries - only using nn.linear() modules, without a non-linearity between them - the best we can achieve is an accuracy of 50%. 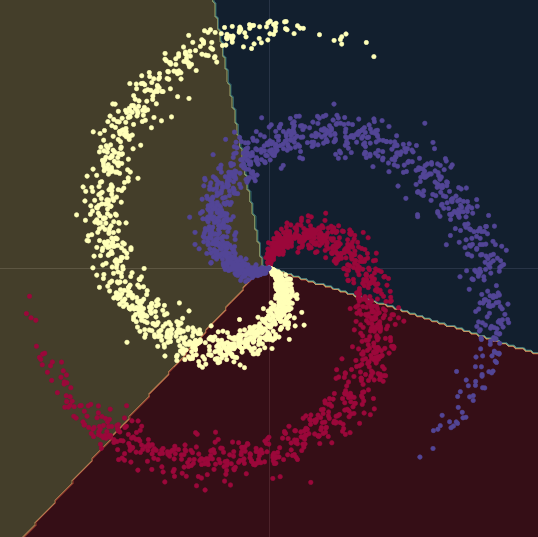 When we go from a linear model to one with two nn.linear() modules and a nn.ReLU() between them, the accuracy goes up to 95%. This is because the boundaries become non-linear and adapt much better to the spiral form of the data, as it can be seen in Fig. 10. 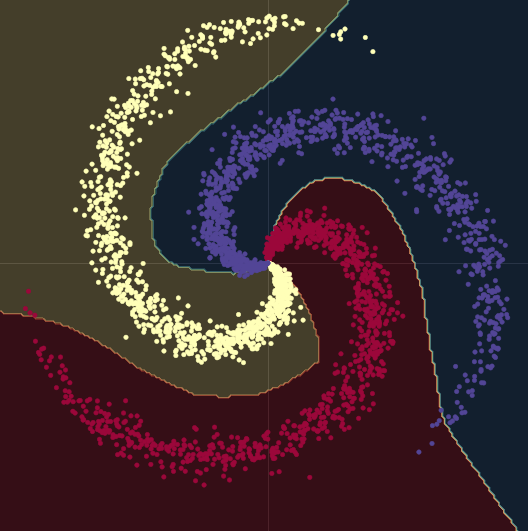 An example of a regression problem which can’t be solved correctly with a linear regression, but is easily solved with the same neural network structure can be seen in this notebook and Fig. 11, which shows 10 different networks, where 5 have a nn.ReLU() link function and 5 have a nn.Tanh(). The former is a piecewise linear function, whereas the latter is a continuous and smooth regression.

The yellow and green lines show the standard deviation and variance for the networks. Using these is useful for something similar to a “confidence interval” - since the functions give a single prediction per output. Using ensemble variance prediction allows us to estimate the uncertainty with which the prediction is being made. The importance of this can be seen in Fig. 12, where we extend the decision functions outside the training interval and these tend towards $+\infty, -\infty$.

To train any Neural Network using PyTorch, you need 5 fundamental steps in the training loop:

When training a NN, it is very likely that you need these 5 steps in the order they were presented.